I've updated the pollster house effects chart for EKOS in Canada and Quebec, incorporating the polling from the month of April 2010.

Nationally, the most favourable pollster for the Conservatives remains Ipsos-Reid, who has results for them 3.5 points higher than the average of the other pollsters. Their worst pollster is Harris-Decima, 2.4 points lower than the average.

The New Democrats' best pollster is Angus-Reid (+1.7) and their worst are Ipsos-Reid and Environics (-2.2).

Speaking of Strategic Counsel, does anyone know if they have shut down for good?

For EKOS, the pollster I've updated this month, they are the 6th best pollster for the Tories out of eight, the 4th best for the Liberals, 6th for the NDP, and the 3rd for the Greens.

Just for fun, and as EKOS was the last poll released, let's tweak the national and Quebec numbers according to these latest findings:

This pushes the Conservatives up to potential majority territory due to the very low Liberal result.

This doesn't change the situation much in Quebec. The Bloc still has a dominant lead but the Conservatives are looking very weak and the Greens a little more realistic. 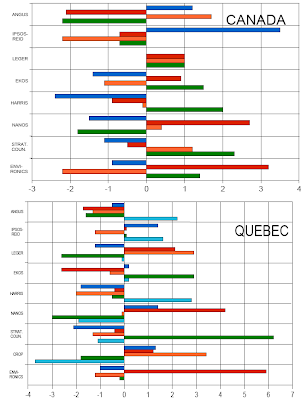