Elections are expensive things. Altogether, the five major parties in Canada spent over $58,000,000 on the 2008 election. But just how valuable was that spending? Which party got the most for every dollar spent, and what did they spend it on?

That's the topic for today's post. Below, you'll see a chart comparing the amount of money each party spent in order to receive one vote. While I do intend to look at the Bloc Québécois and the Green Party, their special circumstances make them less useful as a basis for comparison. The three major parties, however, are on the same playing field: they are well-known parties, have long standing organizations, and run in every part of the country. 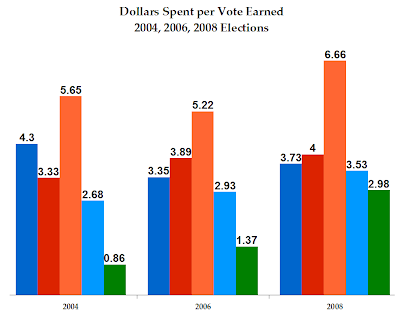 But what does this mean? Out of the three major parties, the Conservatives have gotten the best bang for their buck lately. In the last two elections when they have out-performed the Liberals and the NDP, they have spent less of their money on their leader's tour and party salaries than the other two. In 2006 and 2008, the percentage of total money spent on the leader's tour was 17% and 13%, respectively. The Liberal numbers for those two elections are 19% and 17% respectively, and the NDP's are 27% and 24%, respectively.

This seems to indicate that flying your party leader around the country is not an efficient use of your money, as opposed to, say, advertising. Of the three parties, the NDP spends the least amount on advertising and has the worst results.

In the last two years, the Conservatives have spent about 4-5% of their total on salaries, compared to 10% for the Liberals and NDP. It seems that having a large group of paid employees does not help in getting votes.

From this, it seems to suggest that for the main, traditional parties, the amount of money spent can dictate the amount of votes earned. The Conservatives and Liberals have averaged about the same $/vote since the Conservatives were re-born in 2003. This means the Tories are at an advantage because they currently have more money.

The NDP has to spent a lot more to get votes, and it doesn't appear that spending more means getting more votes. Spending has out-paced vote growth for the NDP, indicating that the fact the NDP spent like the "big boys" in 2008 had less to do with their electoral success than the performance of the party itself.

Over the last three elections, the NDP has averaged 46% of its expenses spent on advertising. For the Conservatives, that number is 49% and for the Liberals it is 57%. Perhaps the NDP needs to spend more on advertising - their best electoral result, in 2008, was the time they spent the most on advertising.

It is difficult to come to some solid conclusions from these numbers. The Bloc and the Greens are better at using their money, but that may be caused more by their special circumstances. The Liberals have gotten worse, but on the whole are not too different from the Tories. The NDP spends way too much per voter.

In 2006, when the Tories again out-performed the other two parties, they spent the least on the leader's tour (17%) and salaries (5%), but were middle-of-the-pack on advertising (51%). The NDP performed worst again in this election, and spent the least on advertising (44%), the most on the tour (27%), and tied the Liberals with 10% spent on salaries.

The 2004 result muddies the water a little, but it seems that when a party spends more money on advertising and less on an expensive tour and salaried employees, they perform better.
Posted by Éric at 11:43:00 AM