It don't mean a thing if it ain't got that Swing...

The lesson is that we projectors can't limit ourselves only to what the polls say. We're only as good as the information provided. I'll have a little more on that next week, with a possible tweak to the model.

One of the words I heard a lot during the election and especially during last night's coverage on the BBC was "swing". So, using the UBC's election forecaster, I took a look at what kind of swing each party needs from the 2008 election to reach their goals. First, let's start with the Conservatives and their elusive goal of a majority government. 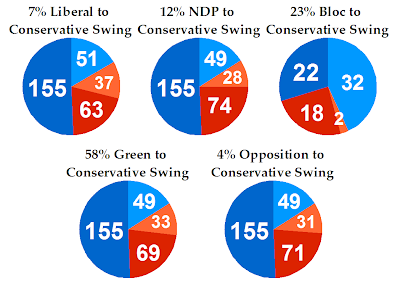 The smallest swing needed is a 4% swing from all of the other parties to the Tories. This would bump the Conservatives up to 40.1% and their majority, reducing the Liberals to 25.2%, the New Democrats to 17.5%, and the Bloc Québécois to 9.6%.

The Conservatives would need 23% of the Bloc vote in Quebec to be bumped up to 22 seats in the province, and 155 nationally. The Bloc would be reduced to 29.3% in the province and 32 seats.

Fifty-eight percent of the Green vote, dropping them to 2.8%, would bump the Conservatives up to 41.6%.

Now, the Liberals and their goal of forming a minority government. 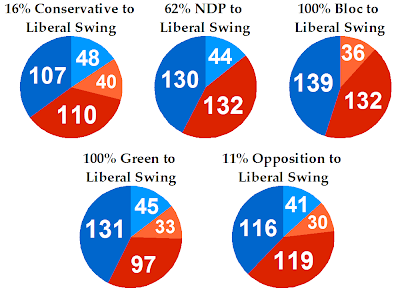 Then it gets much trickier. Fully 62% of the NDP vote would need to go the Liberals for them to form a minority. With the Conservatives at 37.7%, this transfer would give the Liberals 37.5% and a narrow, two-seat minority. The NDP, dropped to 6.9%, would not win a seat.

Neither the Bloc nor the Greens alone can give the Liberals the minority they want. If the Bloc died off and all of its support went to the Liberals, they would still only win 132 seats to the Conservatives' 139. The Liberals would be at 36.2% of the vote, 61.9% in Quebec (where they win 69 seats), but still not have enough. And if all Green support went to the Liberals, they would only have 33% of the vote and 97 seats to the Conservatives' 131. Neither the NDP nor the Bloc would be severely reduced by this.

This shows how tricky it will be for the Liberals to form the next government without support from another party. They need relatively significant swings from the other parties or the Conservatives, and even then it is a near-run thing. The NDP, while stealing some of their votes, should not be the target of the Liberals.

Now, the New Democrats, and their goal of becoming the alternative in Canada and the Official Opposition. This exercise is a demonstration in the absurdities of our system. 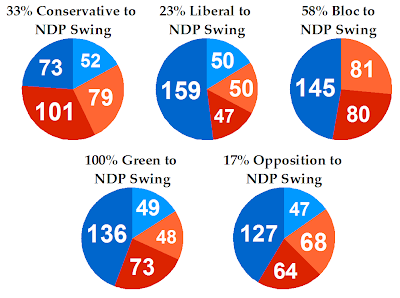 They would need a 17% swing from all the other parties to the NDP for them to form the Official Opposition. In such a situation, the Tories would form government with only 31.3% of the vote. Indeed, with 32.1% of the vote (more than any other party), the NDP would still only win 68 seats. The Liberals would be reduced to 21.8% and 64 seats and the Bloc to 8.3% and 47 seats.

If the Liberals lost 23% of their vote to the NDP, the Conservatives would form a majority government. But, with 24.2% of the vote, the NDP would win 50 seats and tie with the Bloc. The Liberals would be reduced to 20.2% but still 47 seats.

With 33% of the Conservative vote going to the NDP, the Liberals win the most amount of seats with only 26.3% of the vote! The NDP, with 30.6%, win only 79 seats and form the Official Opposition. The Conservatives would be reduced to 25.2% and 73 seats.

This shows the limits of our first-past-the-post system. The Bloc Québécois has always been used as an example, but that is more easily explained away by the fact that the Bloc is a regional party that wins in most of the ridings in which it runs.

If the NDP ever succeeds in becoming a third party equal to the others, it would really throw Canadian politics out of whack. This little exercise has shown that even winning the national popular vote wouldn't be enough to give the NDP enough seats to form government. Our system is designed as a two-party system, something the Bloc has used to its advantage in Quebec. But if Canadian politics becomes a three-party affair, the system would fall apart and hardly resemble anything close to democratic.
Posted by Éric at 7:53:00 AM