Two polls were released this morning, one from Nanos and one from EKOS. Lately, these two pollsters couldn't be any different. EKOS finds rock-bottom support for the Conservatives and Liberals, while Nanos usually has them both higher than everyone else. According to Nanos, 70.4% of Canadians support one of the two big parties. For EKOS, that number is 59.2%.

We'll start with Nanos, who last polled in early March. 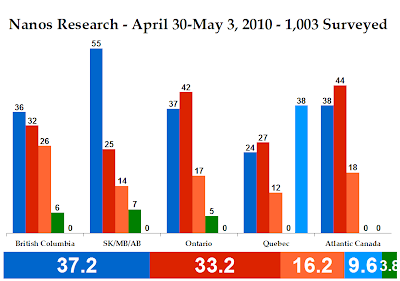 It's difficult to reconcile these numbers with other polls - which I know can be a fool's errand. But no one has had the Liberals over 30% in a very long time, and the Conservative result will be one of the highest in my model. And the Greens below 4%? I suppose it could be true, but I doubt they will get 0.3% support in Quebec and 0 votes in Atlantic Canada. 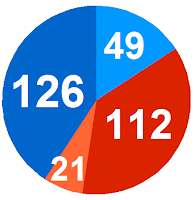 Using this site's current projection for Alberta and the Prairies, the Conservatives win 66 seats in the West, 41 in Ontario, 10 in Quebec, and 9 in Atlantic Canada for a total of 126. 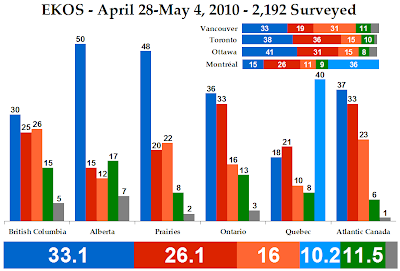 Coupled with Nanos, this indicates the little bump the NDP had may have disappeared.

Elsewhere, the Conservatives lead in Atlantic Canada with 38.6%, where the NDP has dropped seven points. The Tories also lead in Alberta with 49.8%, down five. In the Prairies, they lead with 48.4%, up 10, while the Liberals are down eight to 19.8%. 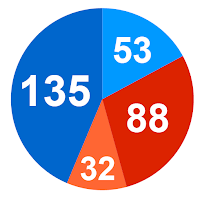 So, two very different polls. The big culprit seems to be the Greens, as I think we can all agree it is unlikely the Greens would drop to 3.8%, losing almost half their support, or double their support to reach 11.5%. So, they are more likely somewhere in between, meaning there are four points to distribute elsewhere. That changes both polls quite a bit.

More importantly, though, is where the polls are similar. They both show the Conservatives making modest gains, and the Liberals losing ground. They both show the NDP down and the Bloc up. They both show a close race in Ontario and British Columbia. These are the things to take from these two polls.
Posted by Éric at 8:57:00 AM