Léger Marketing has released a new poll of the federal and provincial voting intentions of Quebecers. Today, let's look at the federal results. 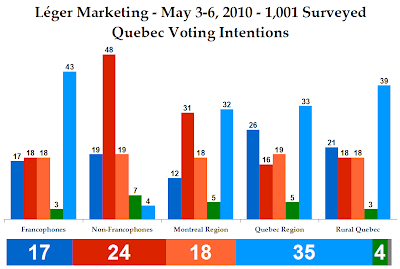 Compared to Léger's last large provincial poll, the Bloc Québécois has dropped three points to 35%. The Liberals are up three to 24% while the Conservatives are steady at 17%.

The New Democrats have picked up one point, standing at third place with 18%.

The Bloc's losses seem to have come throughout the province, as they are down two points to 43% among francophones, down four points to 4% among non-francophones, down one point to 33% in the Québec City region, and down five points to 39% in rural Quebec. The party is steady around Montréal with 32%. These aren't completely worrisome figures, as the party is still well ahead and these losses should all be within the MOE.

In contrast, the Liberals seem to have made uniform gains. They are up two points among francophones to 18% (which is still too low), five points among non-francophones to 48%, two points around Montréal with 31%, and four points in rural Quebec to 18%. They've dropped one point in Québec City to 16%, however. They aren't in any of the races there, but look to be able to be very competitive in Montréal.

The Conservatives were pretty steady, but dropped one point to 26% in the Québec City region. As that is their bread and butter, that is not good news for them. 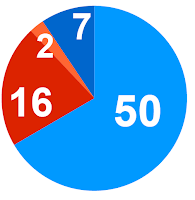 The Bloc would win 50 seats with this poll, taking advantage of weaker Conservative numbers than in 2008.

The Liberals win 16 seats, while the Conservatives win 7 and the NDP wins 2.

The Conservatives continue to have trouble getting back to their 20+ levels of 2006 and 2008, while the Liberals look stagnant. In fact, all of the major parties appear to be stagnant, which is not exactly bad news for the Bloc. They have a lock on a majority of the seats as long as the Liberals and Conservatives can't make any moves. Their only worry would be the NDP, but the party's support is much more widespread than regional, so they aren't in a position to win anything but a couple seats in Montreal and the Outaouais if everything goes right for them.
Posted by Éric at 8:59:00 AM