As you can see, the site has been changed to incorporate my projection and electoral coverage for the 2010 New Brunswick provincial election.

The bar chart at the bottom of the above chart shows the amount of seats each party currently has in the Legislative Assembly.

Above right, you can see a chart that tracks voting intentions. The chart runs all the way from the 2006 election to the date of the 2010 election: September 27. Everything before the black line is pre-campaign, everything after is during the campaign. And while the pre-campaign section does not give equal space to equal time (instead, each tick is one poll), the campaign section gives one tick per date of the campaign. My intention with this chart is not just to show polling results, but also to track how they are changing over time.

Here is a larger version of the chart, which you can also see by clicking on the image to the right. 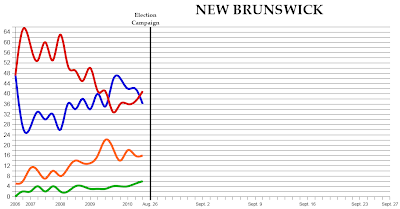 Below the voting intentions chart, you can see who I project will be sitting in the 55 seats of the Legislative Assembly. And at the very bottom of the page you can see the full details of my projection, including a list of polls and electoral results running back to 1991. The polling results highlighted with light and dark colours marks each party's highest and lowest result.

For the projection itself, I am currently projecting a Progressive Conservative majority government under David Alward. The PCs would win 29 seats (with 43.5% of the vote) while the Liberals under current Premier Shawn Graham would be reduced to 24 seats and the opposition benches with 41.9%. The NDP, who have never elected more than one MLA, will elect two and make a (for them) historical breakthrough at 11.7%.

With the most recent poll being almost three months old, the projection is heavily weighted by past elections and old polls. This will change as polls are released during the campaign.

Later this week I will have a 2010 election primer in order to give everyone who doesn't follow New Brunswick provincial politics their bearings.
Posted by Éric at 9:10:00 AM