And now for something completely different.

Harris-Decima has a new poll out, and it disagrees with both the most recent EKOS and Ipsos-Reid polls. 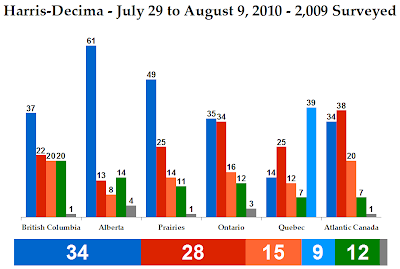 Compared to Harris-Decima's last poll taken between July 15 and July 25, the Conservatives have actually gained three points, and now stand at 34%. The Liberals are also up two points to 28%. While the Conservative gain goes against what the other polls have found, the Liberal gain does not.

The New Democrats are the losers of this poll, dropping three points to 15%. The Bloc Québécois is down to 9% while the Greens are unchanged at 12%.

The Conservatives are up one point in Ontario and lead with 35%. The Liberals are steady at 34%. All of the pollsters seem to agree on the situation in this province. The NDP is down two to 16%.

The Bloc has dropped two points in Quebec and leads with 39%. The Liberals follow with 25% (up six) while both the Conservatives and NDP have gained one point and stand at 14% and 12%, respectively. That is a large Liberal gain between two recent polls of 2,000+ respondents.

And this is something I find odd about this poll. These were taken virtually continuously over the last four weeks and included a lot of people, yet we have a lot of movement. Isn't this supposed to be the dog days of summer?

For example, the Conservatives are up six points in British Columbia, leading with 37%. The Liberals are unchanged at 22% but the NDP is down ten to 20%! While that does correspond with the recent Ipsos-Reid poll, that is a big drop. The Greens are up seven points to 20%, putting them in a good position. Indeed, Elizabeth May seems to be safe for the time being as the Green Party has elected to keep her on as leader rather than put her through a leadership race at the end of the month.

Things are relatively stable in Atlantic Canada, however, with the Liberals ahead of the Conservatives 38% to 34%.

It is just slightly strange to have such large variations in two polls taken within a short time of each other and with relatively small margins of error. I don't think there is anything particularly untoward about this, it is likely that both this poll and the last one were on the outside edges of the accuracy spectrum, giving us exaggerated variations. Nevertheless, we rarely see this kind of movement in similar EKOS polling. 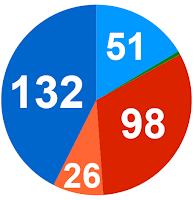 The NDP wins 6 seats in the West, 15 in Ontario, 2 in Quebec, and 3 in Atlantic Canada for a total of 26. Those numbers out west were horrible.

So, a reduced minority for Stephen Harper and a smaller caucus for the NDP. But a gain of more than 20 MPs for Michael Ignatieff, three new MPs for the Bloc, and the first elected Green MP. The only party who really comes out of this poll badly is the NDP as, despite their reduction in MPs, a minority of this size would buy the Conservatives another 18-24 months.
Posted by Éric at 9:06:00 AM