Last Friday, Angus-Reid released a new poll on the provincial political situation in British Columbia. While the gap between the opposition BC New Democrats and the governing BC Liberals remains an insurmountable 21 points, it is decreasing. 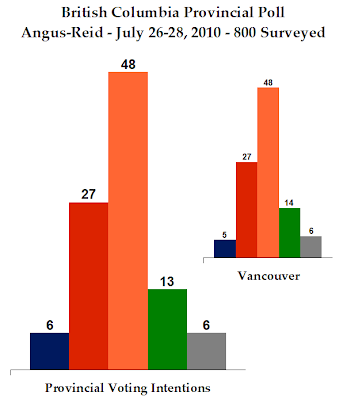 Compared to Angus-Reid's last poll, taken between July 6 and 8, the BC NDP is up two points, leading with 48%. The BC Liberals are up four points, however, and stand at 27%. That is still very, very low for them.

The BC Greens are in third with 13% (down one) while the BC Conservatives are down two points to 6%.

The NDP's gain came mostly in Vancouver, where they are up seven points to 48%. They also gained four points in the North (40%) but lost one in the BC Interior (42%) and ten on Vancouver Island (57%).

The source of the Liberal gain was everywhere but the Vancouver region. They gained six points in the North (32%), seven points on Vancouver Island (16%), and 12 points in the Interior (33%). Nevertheless, they are still behind the NDP in every part of the province.

The Greens had a six point gain in the North, where they have 19%. That is their best region. The best region for the Conservatives is on Vancouver Island, where they are up four points to 9%.

The BC New Democrats comfortably lead in all demographics but one: the BC Liberals have a narrow lead among those who earn more than $100,000 per year. Not exactly something you want to trumpet from the rooftops.

Interestingly, Angus-Reid conducted the same poll twice again but put former Finance Minister Carole Taylor or Surrey Mayor Dianne Watts at the helm of the BC Liberals. It didn't change much, however. With Taylor leading the Liberals the gap is reduced to 42% to 34%, while with Watts it is 44% to 34%. Any way you slice it, it means an NDP government. 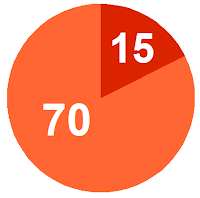 Speaking of which, this poll would give the BC New Democrats 70 seats. The BC Liberals would take the remaining 15, two more than they took in Angus-Reid's last poll.

Of course, with numbers like these the changes could very well be nothing but statistical noise. But the small increase in support the Liberals get with either Taylor or Watts as leader indicates that the party has more work to do than merely replacing Premier Gordon Campbell, who seems to be costing the Liberals only seven points.
Posted by Éric at 9:31:00 AM