Time to look at July's polling. Six national polls were released during this month (one fewer than last month), totaling about 9,487 interviews. Here are the results we get at the national level, with the difference from last month's average in brackets.

The Conservatives made a decent little step forward in July, but it does not erase the 1.9 points they lost in June. The Liberals are also up, but are back to where they were in May. The NDP take a step backwards after gaining a full point in June. The Bloc is up a tiny bit, but up 0.4 points in the past two months. The Greens have erased most of the gains they made in June, and are now back in fifth place. 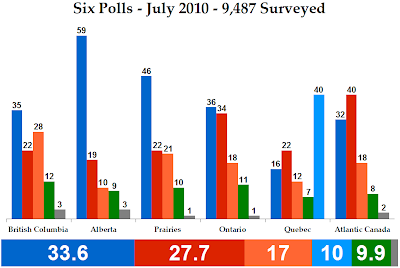 Looking at the polling trends since January 2009, we see that barring the good result for the Tories in May 2010, this is their best result since December 2009, when the party was polling at 36.8%. For the Liberals, they have been steady at this level, give or take 0.5 points, since March. The NDP seems to be on a slow path upwards despite their step backwards this month, while the Greens have been comfortable over 9.6% since December. 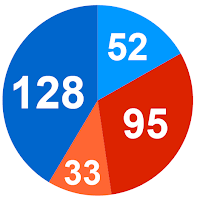 The Conservatives maintain themselves but the Liberals make a good gain of four seats. At the national level, they come at the expense of the Bloc and the NDP, who both lose two seats.

The Conservatives make a modest gain in the province, but their lead over the NDP is shrinking. The Liberals are back to exactly where they were at the end of May. The Greens have lost all that they gained in June.

The Conservatives are back to their traditional levels in Alberta, while the Liberals still look to make a big leap forward in the province, relatively speaking. The NDP has dipped to single-digits, while the Greens are also down.

The Conservatives are up a little bit, as are the Liberals and the NDP. The Greens drop but are at a very good level for them.

The Conservatives take 66 in the West (unchanged from June), while the Liberals win 15 in the West and North (up one) and the NDP wins 14 (down one).

The Conservatives make a small gain while the Liberals have dropped a full point. The race is still very tight in this battleground province, however. The NDP seems to be making serious inroads, with a gain of two points in the last two months. The Greens drop but they have been relatively stable in Ontario for the past few months.

The Liberals seems to be on a slow decline in Ontario from their high of 38.1% in February. They are still performing better than their dregs of October and November 2009. The Conservatives have been relatively stable in the province since the beginning of the year, while the NDP has been on a steady inclcine. Throughout 2009 they were polling anywhere between 13.0% and 16.9%, but since March the party has been doing very well. This 17.8% is their highest polling average since I've been keeping track.

The Bloc is down a little, but this comes after a gain of almost two full points in June. They are still over the 40% mark, which is where the party wants to be. The Liberals have made a gain equal to the ground lost last month. The Conservatives are up from June, but down from where they were in May. The NDP is down a little bit, but they had gained 0.3 points in June. The Greens are down more than a full point.

While this is a step down from the Bloc's best-ever (since January 2009 at least) result of 40.6% last month, this is still their third best result, second being 40.3% back in February 2009. The party's trend line is inching steadily upwards. The same can't be said for the Liberals, who have gone from a high of 34.3% back in May 2009 to their current level of 22.4%. They've been stuck in the sub-23% level since March. The Tories have been relatively stable through 2010 while the NDP has been slowing increasing their support. Whereas in 2009 they usually polling around 10% or 11%, they have been over 12% for the last four months. Of the five parties, it is the Greens who had the worst month. Their net loss in the six regions was 7.6 points, including a loss of 3.8 points in British Columbia. They need to be doing much better there if Elizabeth May is going to have a chance at getting elected, despite Gary Lunn being snubbed at the cabinet shuffle. It also doesn't help the party that they are stagnant in Ontario, where they also have a chance to win a seat if they have a good election.

Next is the NDP, which had a net loss of 1.7 points. They also lost two seats in the projection, and suffered damaging losses of almost two points in Alberta and Atlantic Canada. Their gains in British Columbia and Ontario, however, are good news.

Then we have the Bloc which dropped 0.4 points in Quebec and two seats. But they are still well ahead of the Liberals and look to gain four seats in this projection compared to their current standing in the House of Commons.

On the positive side of the ledger we have the Conservatives, who had a net gain of 2.8 points. While their projected seat total has not changed, they have made good gains in Quebec and Alberta, and had decent results in Ontario, the Prairies, and British Columbia. Their result in Atlantic Canada is troublesome.

And the title of July's big winner goes to the holder of June's big loser title: the Liberals. They had a net gain of 9.3 points and are up four seats from June's projection. They had a very good gain in Atlantic Canada, and performed solidly in Quebec, the Prairies, Alberta, and British Columbia. Their slip in Ontario, however, is the black mark on July's results.
Posted by Éric at 9:05:00 AM