It's that time of the week again, and so we have a new EKOS poll. Nothing too exciting, but once again we see growth for both of the two main parties. Is this an indication that Canadians are starting to get serious about the next election? 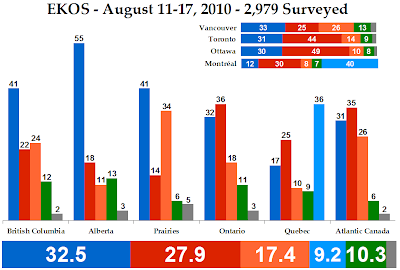 If we compare this last week of polling to polling done between August 4 and 10, we don't see much change. What we do see, however, is that the NDP jumped about two points between Week 1 and Week 2, in part due to better performances in Atlantic Canada. The Conservatives jumped in British Columbia while the Liberals and Conservatives headed in different directions in Ontario to the benefit of the Grits.

The Liberals lead in Atlantic Canada with 35.1%, followed by the Conservatives at 31.1%. The NDP have jumped six points here to 26.3%.

The Conservatives lead in Alberta with 55.2%. The Liberals are well behind with 17.6%. 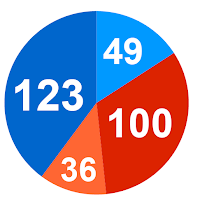 The Conservatives win 72 seats in the West and North, 36 in Ontario, 8 in Atlantic Canada, and 7 in Quebec for a total of 123. Their performance in Ontario is a killer.

Relatively speaking, this is a good poll for the Liberals and the NDP. While the Conservatives still have the lead, their caucus would be reduced significantly. The Liberals would make a big gain while the NDP would maintain itself. Together the two parties would outnumber the Conservatives, making life difficult in the House of Commons if Stephen Harper remained as Prime Minister.

The Conservatives are still hobbled and with the recent news about the RCMP and veterans' affairs, they aren't going to be making any gains. The Liberals are still weak but are showing signs of life: most polls have had Michael Ignatieff's party on the upswing. With all that has been going on this summer (and it has been pretty tumultuous!) it sets up an interesting fall session of Parliament.
Posted by Éric at 9:20:00 AM