Last week, Ipsos-Reid released a new Ontario provincial poll. It showed a race that is as close as it can be, with the Progressive Conservatives leading the Liberals 36% to 35%. With my new Ontario projection model, that equates to a PC minority. 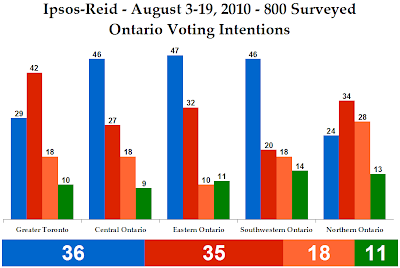 Compared to Ipsos-Reid's last Ontario poll taken in May and June, the PCs are up four points. The Liberals are down two.

The New Democrats are down two to 18% while the Greens are unchanged at 11%.

The NDP's best region is northern Ontario, where they are second at 28% (up one). They are at 18% in the GTA, central, and southwestern Ontario, losing four in that latter part of the province.

The Greens are doing best in southwestern Ontario with 14%.

Interestingly, while the Liberals lead in the GTA 42% to 29%, outside of Toronto the PCs lead with 43% to 28%. It really is a Toronto/rest of Ontario divide. It's not even urban/rural, really, when you see that the parties are almost tied in urban areas (36% for the Liberals to 35% for the PCs). The Progressive Conservatives have a massive lead in rural Ontario, however, 47% to 25%. The NDP does better in urban ridings, with 19% to 11% in rural ones. 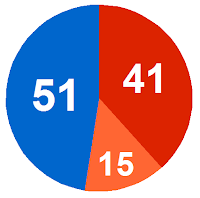 The Progressive Conservatives would win 51 seats with this poll, compared to 41 for the Liberals and 15 for the NDP. A minority government, or would Dalton McGuinty and Andrea Horwath work together?

Speaking of the leaders, Tim Hudak is the favourite for Premier, at 37%. McGuinty is next with 29% and Horwath is at 21%. Green leader Mike Schreiner is at 13%.

McGuinty's best is in the GTA, with 35%. His worst is in the north, with 10%. Again, also strange, as northern Ontario was the party's second best region.

So, a close race in Canada's biggest province. But McGuinty is a cat with nine lives, and Hudak still has a lot of unknowns. There's still another year before the next election, so anything can happen.
Posted by Éric at 9:09:00 AM