Leaving the New Brunswick election aside for a few moments, let's look at a recent Léger Marketing poll investigating the provincial voting intentions of Quebecers. Generally speaking, it is the status quo - but the poll has some interesting findings. 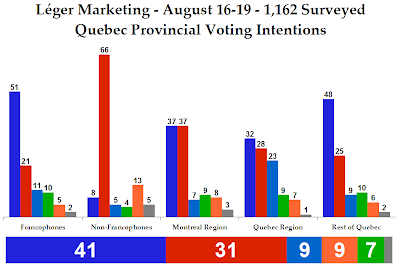 Compared to Léger's last poll in June, things have not changed much for the two main parties. The Parti Québécois is stable at 41% while the Liberals (PLQ) are up one to 31%. The Action Démocratique du Québec, however, loses four points and is down to 9%, tied with Québec Solidaire (up one). The Greens (PVQ) are up two to 7%.

But this poll was taken before the on-going Bastarache inquiry, in which former justice minister Marc Bellemare alleges that Premier Jean Charest was urging him to appoint judges who were donors to the Liberal Party. Léger has found that only 13% of Quebecers believe Charest in this matter, compared to 69% who believe Bellemare. Fully two-thirds of Quebecers think the Premier should resign. 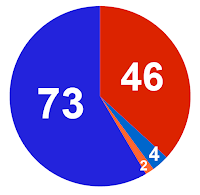 With this poll, the Parti Québécois would win 73 seats and form a majority government. The PLQ would form the official opposition with 46 seats. The ADQ would win four and QS would win two.

Léger also looked into who would be favourite to replace the Liberal leader. No one is the front-runner, but current federal MP Denis Coderre ended up on top with 11%. He was followed by former health minister Philippe Couillard at 10%, and cabinet ministers Nathalie Normandeau with 6% and Claude Béchard with 5%. When asked how these leaders would change their voting intentions, no one improved the PLQ's score. One wonders if that will change after the Bastarache inquiry.
Posted by Éric at 10:03:00 AM