Léger Marketing has finally put up the results of a federal poll taken between August 2 and August 4. The poll is now three weeks old and accordingly less relevant, but it is worth taking a look at nonetheless.

The poll has the Conservatives at 37%, up one from the previous Léger federal poll taken in April 2010. The Liberals are up three to 28% while the New Democrats are down four to 16%. The Bloc Québécois is unchanged at 9%, as are the Greens at 8%.

The Conservatives lead in Ontario with 41%, up two. The Liberals follow with a gain of four points and are at 34%. The NDP is down three to 18%.

In British Columbia the Conservatives are up seven to 48%, followed by the NDP and Liberals at 19% apiece. The NDP dropped five points and the Liberals dropped eight. The Greens picked up three to reach 11%.

In Atlantic Canada, the Liberals gained six points and are at 43%. The Conservatives dropped six to 24% and the NDP dropped nine to 20%.

And finally, the Conservatives lead in the Prairies with 48%. The NDP and Liberals have 23% apiece, marking a six point gain for the NDP. 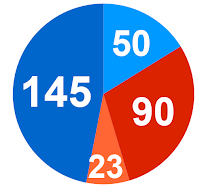 The Conservatives would have won 76 seats in the West and North, 55 in Ontario, 8 in Quebec, and 6 in Atlantic Canada for a total of 145.

The Bloc would have won 50 seats in Quebec.

Now, what of the polling result for Quebec? This is where things get odd. 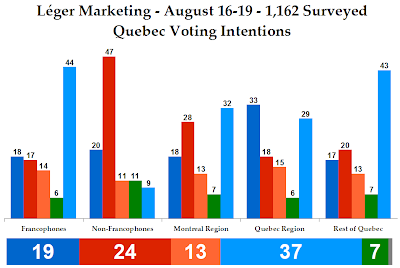 This poll is available here, as it was conducted for Le Devoir. But the results of this poll, taken between August 16 and August 19, are exactly the same as the one taken between August 2 and August 4. Is that possible? The amount of people polled in the first survey (377 in Quebec, 1,500 Canada-wide) was much smaller than in this one, yet the results are exactly the same, down to the Greens and Other.

While it is certainly possible that Léger would get the same results, it is pretty unlikely. For that reason, I will be treating the Canada-wide poll and the Quebec-only poll as one poll for the projection, rather than two.

In this Quebec poll, the Bloc is down two points from June and leads with 37%. The Liberals are down one to 24% and the Conservatives are up three to 19%. The NDP is down two to 13% and the Greens are up four to 7%.

Among non-francophones, the Liberals dominate with 47% (up three). The Conservatives follow with 20% (down two) and the NDP and Greens are tied at 11% each. The Bloc is down four to 9%.

Regionally, the Bloc leads in the Montreal region with 32%, down nine. The Liberals are down one to 28% while the Conservatives are up seven to 18%. The NDP is at 13%, down one.

In the Quebec City region, the Conservatives have gained five points and lead with 33%. The Bloc follows with 29%, down three. The Liberals are up one to 18% and the NDP is down three to 15%.

As to which leader garners the most confidence from Quebecers, Gilles Duceppe leads with 28%, followed closely by Jack Layton at 27%. Stephen Harper only has 11% while Michael Ignatieff has 9%. This shows that the two main federalist parties are not being helped by their own leaders, while the NDP has room for growth.
Posted by Éric at 9:46:00 AM