A few days ago, the media reported on a new Harris-Decima poll that showed a small gap between the Liberals and the Conservatives. Harris-Decima posted the details of that poll on their website yesterday, and it tells a story of Liberal gain. 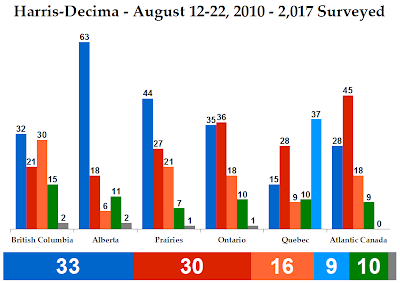 Compared to Harris-Decima's last poll taken at the end of July and in early August, the Conservatives have dropped one point, standing at 33%. The Liberals have gained two points, and have reached the 30% mark.

The New Democrats are up one to 16% while the Greens are down two to 10% and the Bloc Québécois is stable at 9%.

Though we're talking incremental gain at the national level, this is good news for the Liberals. It wouldn't seem right for them to lead a government, even a coalition, with less than 30% support.

In Ontario, the Liberals are up two to 36% while the Conservatives are unchanged at 35%. The NDP is up two to 18%.

The Bloc has dropped two points in Quebec and is now at 37%. This is a bit of a trend we've seen lately, with the Bloc moving away from the 40%+ they were enjoying throughout the summer. The Liberals are up three to 28% (very good for them) and the Conservatives are up one to 15% (not good). The NDP is down three to 9%, which is a bit of a problem.

The Conservatives have dropped five points in British Columbia and hold a narrow lead with 32%. The NDP is up 10 points and is at 30%, while the Liberals are down one to 21%. The Greens are down five to 15%.

The Liberals are riding high in Atlantic Canada with 45%, up seven. The Conservatives followed with 28%, down six.

The Conservatives lead in Alberta with 63%, followed by the Liberals at 18% (up five).

And in the Prairies, the Conservatives have dropped five points but still lead with 44%. The Liberals are at 27% and the NDP is at 21%, up seven. 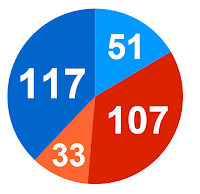 The Conservatives would win 63 seats in the West and North, 43 in Ontario, six in Atlantic Canada, and five in Quebec for a total of 117. That would be their worst result since 2004.

The Bloc would win 51 seats in Quebec.

The NDP would win 16 seats in the West, 15 in Ontario, and two in Atlantic Canada for a total of 33.

It will be interesting to see how things develop between now and the resumption of Parliament. The Liberals are getting good coverage lately, and Michael Ignatieff finally seems to "get" being a political leader. Good news is few and far between for the Tories and the NDP is going to take a beating with this long gun registry issue. I would not be surprised to see the NDP drop a tick or two to the Liberals. But, then again, I would not be surprised to see the Liberals drop back to 27% or so, which seems to be what always happens.
Posted by Éric at 9:34:00 AM