Time for the July "best case scenarios". Not a very positive month for anyone. The situation has gotten marginally worse for the Conservatives, relatively worse for the Liberals, and unchanged but less ideal for the New Democrats.

In other words, these projections are the best possible result each party could've gotten had an election taken place last month, based on the available polling data.

Things are unchanged for the New Democrats, who in July could do no better than 44 seats. While that would be a historic best for the party, the 20.0% that would give it to them would not be. These 44 seats are unchanged from last month. 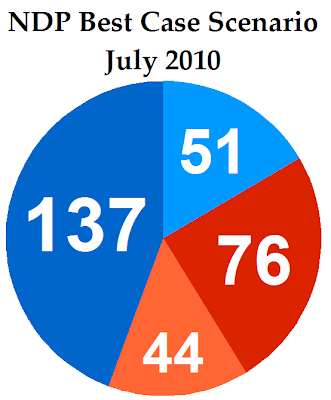 The Liberals do increase their seat haul this month, taking 112 seats rather than last month's 111. Nineteen of them come in the West, 51 in Ontario, 17 in Quebec, and 25 in Atlantic Canada. But while this does mean one more MP for the party than last month, it means a bigger gap between them and the Conservatives. 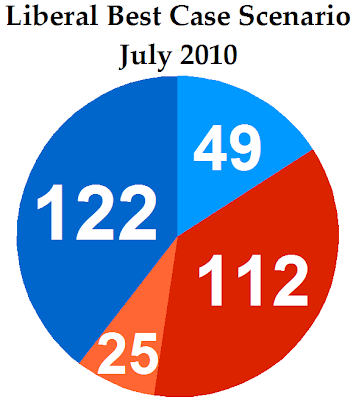 Though the Liberals take 32.4% of the vote in this scenario, the Conservatives maintain enough of an edge to win 122, ten more than they won in the Liberal best case scenario in June. While the combined total of the Liberals and NDP (137) is better than what the Conservatives can muster, the situation is not as cozy for Michael Ignatieff.

All in all, however, the change in best case scenarios is worst for the Conservatives. With 36.5% of the vote, the party would win 142 seats: 70 in the West and North, 54 in Ontario, 8 in Quebec, and 10 in Atlantic Canada. 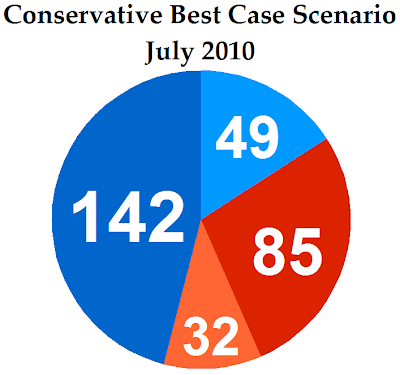 Last month, however, they were at 154 seats, or one shy of an outright majority. They've moved away from that significantly, and their best case scenario is now marginally worse than their present standing in Parliament, though the difference (even in the make-up of the Opposition) is negligible.

Clearly, the Liberals still have a lot of work to do before they are in a situation that would make them relish an election. While increasing their caucus from 77 to 112 MPs would be great for them, it would still mean a possibility of being on the Opposition benches. And if Ignatieff ended up as Prime Minister, it would be as head of a relatively weak coalition government.

The NDP do have some things going for them. They do have a chance of increasing their seat total and perhaps even being part of a coalition government, but as the other scenarios show they also risk losing some of their clout. If I were them, I would hold off on an election until my best case scenario number was in the high-40s to the low-50s. There's just too much to lose for them.

Finally, the Conservatives have nothing to gain from an election. It is extremely unlikely they would do better than their current 144 MP caucus. While it is probable that they would still win a plurality of seats and so extend the life of their government for another 18-24 months, there is a big risk of finding themselves with fewer seats than the combined total of the Liberals and NDP. While a coalition of that sort is not preferred by the Liberal leader, it is still a distinct possibility, particularly if the Conservatives take a severe drubbing on election night.

We're still seeing too much uncertainty and volatility for any of the parties to want to pull the trigger prematurely. Far more likely is that the parties will putter along until the spring or next fall. The next Conservative budget will either be one of austerity or pre-election spending, both of which can easily be attacked by the opposition for being too harsh or too irresponsible. If Jim Flaherty takes a more middle-of-the-road stance, it will be difficult for the government to promote itself with such an unexciting budget, and if the global economic situation has stabilized, the party's new-found sense of fiscal responsibility will fall flat.

But, then again, Ignatieff could don a hair-net and the Tories could be swept to a majority. Either way.
Posted by Éric at 9:05:00 AM