Corporate Research Associates has released a timely poll on the first day of the New Brunswick electoral campaign. However, the poll was taken throughout most of August, so this is merely a starting point for us. 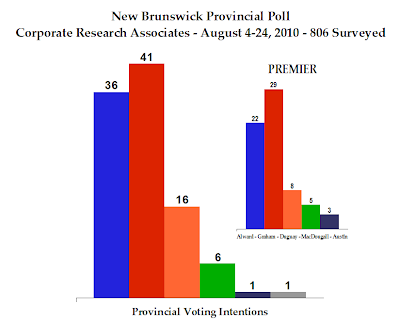 The Liberals have 41%, up four points from CRA's last poll taken in the last half of May 2010. The Progressive Conservatives have dropped six points to 36%, while the New Democrats are stable at 16%.

The Greens are up one to 6% while the People's Alliance comes in at 1%. This is their first mention in a CRA poll.

The amount of undecideds is huge at 41%. So anything can happen at this point. 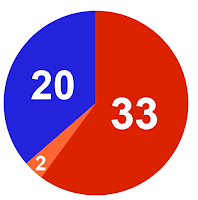 With this result, the Liberals would win 33 seats and Shawn Graham would be elected to a second term. The Progressive Conservatives would drop to 20 seats while the New Democrats would win two.

Satisfaction with Graham's government is not high, at only 44%. That is down from 53% a year ago. Dissatisfaction is at 49%, so really the province is split.

As to who would make the best Premier, 29% of New Brunswickers give the nod to Graham. David Alward is not far behind at 22%. Roger Duguay of the NDP is at 8%, Jack MacDougall of the Greens is at 5%, and Kris Austin of the PA is at 3%.

Taking out the none of the above and don't know responses (34% in all), we get 44% for Graham, 33% for Alward, 12% for Duguay, 8% for MacDougall, and 5% for Austin. This indicates that the Liberals, Greens, and People's Alliance have room for growth, while the Progressive Conservatives and New Democrats could be dragged down a little by their leader. However, I wouldn't put much stock into that for the NDP, as those who support the NDP are well aware that Duguay will not be the next Premier.