On Saturday, Angus-Reid released a new poll looking into the provincial voting intentions of Quebecers. It was their first such poll since April. 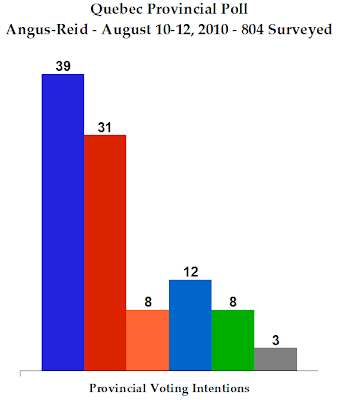 Compared to that poll four months ago, the Parti Québécois has dropped two points to 39%, but still hold a solid lead over the Liberals (PLQ) who are at 31%. That is a gain of eight points.

The Action Démocratique du Québec stands at 12% (down one) and is followed by Québec Solidaire (down two) and the Greens (down one) at 8%.

While this looks like a big Liberal gain coming from across the spectrum, it is worth pointing out that this Angus-Reid poll is very similar to the polls we've seen from other pollsters throughout May and June.

The real problem for Jean Charest's government is its approval rating. Only 23% of Quebecers are satisfied with the government, compared to 71% who are not. 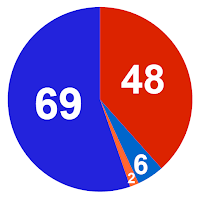 With this poll, the PQ would be elected to a majority government with 69 seats. The Liberals would head the opposition with 48 while the ADQ would have six seats and QS would have two.

This poll doesn't really have anything new to say, though it does help confirm the narrative that other polls have laid out. Namely, that the PQ is well ahead around 40%, the PLQ is well behind at about 30%, and the ADQ has rebounded and weakly reclaimed the third spot in the low teens. QS is doing well and should be poised to elect another MNA (Françoise David).

The next election is still several years away, however, so much can change. But if more Liberal MNAs retire, step down, or are forced to resign because of scandal, Charest's government could be in danger. His party currently holds 65 seats in the National Assembly, 66 if we count ousted cabinet minister Tony Tomassi. When Jean-Marc Fournier wins in St-Laurent (and he will), that will bump the Liberal caucus up to 66 (or 67 with Tomassi). But it is a near-run thing, as the opposition currently holds 59 seats and would be quite happy to bring down the government, given the opportunity.
Posted by Éric at 8:43:00 AM