Starving as we are for polling data, Ipsos-Reid has come along with a very interesting poll. It shows the Conservatives down, the Liberals up, and the gap between them within the margin of error. 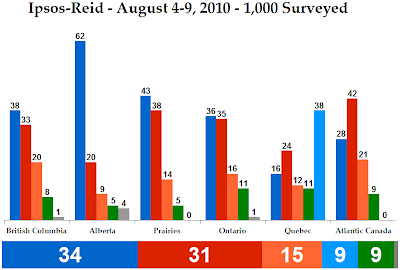 Compared to Ipsos-Reid's last poll taken between July 6 and 8, the Conservatives have dropped one point and now stand at 34%. The Liberals are up two to 31% while the New Democrats are unchanged at 15%.

The Bloc Québécois is down two to 9% and the Greens are down one to 9% as well.

Things are mostly unchanged in Ontario, where the Conservatives lead with 36% and the Liberals follow with 35%. Both of those results are no different than a month ago. But the NDP is up three points to 16%.

The Bloc has slipped in Quebec, dropping seven points to 38%. That is still a big lead over the Liberals who are at 24% (down two). The Conservatives and NDP are both up one to 16% and 12%, respectively.

The Conservatives are stable at 38% in British Columbia, while the Liberals are up seven points to 33%. The NDP is down four to 20% and the Greens are down three to 8%. This contradicts some of the other polling we've seen, showing the race in BC to be between the Tories and the NDP.

The Liberals lead in Atlantic Canada with 42% (where the NDP has jumped six points) and the Conservatives lead in Alberta with 62% and the Prairies with 43%. There has been some movement in that latter region, as the Tories are down eight and the Liberals are up 17 to an unlikely 38%. 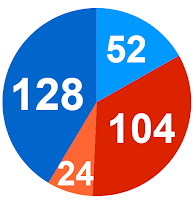 The Conservatives win 68 seats in the West and North, 47 in Ontario, 6 in Quebec, and 7 in Atlantic Canada for a total of 128. They need to be doing better out East and in Quebec if they want to get closer to 2008's result.

The Liberals win 22 seats in the West and North, 45 in Ontario, 15 in Quebec, and 22 in Atlantic Canada for a total of 104. The Liberals can't expect to take home 38% and seven seats in the Prairies, so they need to increase their support in Ontario.

The NDP wins 5 seats in the West, 14 in Ontario, 2 in Quebec, and 3 in Atlantic Canada for a total of 24. Their results in British Columbia and the Prairies are disastrous.

This poll adds fuel to the fire in terms of the narrative of Liberal gains at the expense of the Tories. The census issue won't go away, and as Jeffrey Simpson writes today it isn't so much about the census itself but rather how the Conservatives have handled it and their reasoning behind it that is the problem. Michael Ignatieff has been getting relatively good coverage and it is likely the media is paying far more attention to him in the regional newspapers where he visits.

But the Conservatives still lead, and it will be easier for the Conservatives to hold on to enough votes to keep them in power than it will be for Ignatieff to bring people who haven't voted Liberal since 2004 back into the fold. Numbers like these will give the Opposition a little more bargaining power in the next session of Parliament, but the Prime Minister still has control. It doesn't help that few polls benefit all opposition parties equally, meaning that one or more of them could falter if push comes to shove.
Posted by Éric at 9:00:00 AM