Yesterday, Jane Taber asked "Should Tories, Liberals and New Democrats just give up on Quebec?"

This was prompted by the comments of John Wright from Ipsos-Reid. His argument was that the federalist parties should forget about Quebec and focus on the rest of the country, where 30 new seats are going to be added in the next few years.

In short, with the 18 new seats in Ontario, seven new seats in British Columbia, and five new seats in Alberta, a majority can be cobbled together without Quebec. So why not ignore those Bloc-voting separatists?

Leaving aside the democratic and financial implications of doing such a thing for now, does John Wright have a point?

The current plan for redrawing Canada's electoral boundaries would increase the amount of seats in the House of Commons to 338, meaning 170 seats are needed for a majority. While we cannot know how the boundaries will be redrawn at this point, and so cannot predict how they will vote with a great deal of accuracy, there are a few things we can do to make some educated guesses.

First, let's start by distributing the 30 new seats according to the percentage of seats each party won in Ontario, British Columbia, and Alberta in the last three elections. 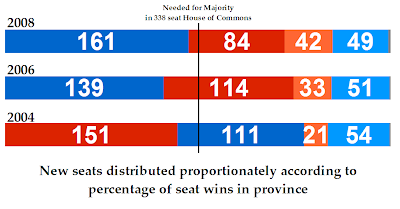 Using this method, no party would have formed a majority in any of the last three elections. The Conservatives would have come closest in the 2008 election, but would still be nine seats short of a majority. Obviously the 2006 election would result in no majority, while the 2004 election would not deliver a Liberal majority.

With the Bloc Québécois winning between 49 and 54 seats, there is still not a lot of wiggle room for the other parties. With 49-54 seats going to the Bloc, the governing party needs to win about 60% of the rest of the seats in order to form a majority. That is a tall order. In the last 50 years, only the 1993 Liberals and 1984 Progressive-Conservatives have won 60% of the seats up for grabs.

The situation is no better if we apply the same system to ThreeHundredEight.com's current projection. Doing that, we get 145 seats for the Conservatives, 102 for the Liberals, 52 for the Bloc, and 39 for the NDP. No majority there.

That means Toronto for Ontario, Vancouver for British Columbia, and Edmonton and Calgary for Alberta.

We'll start with the 2004 election in Ontario, when the Liberals had the chance of forming a majority government. In that election, distributing the seats according to the percentage of seats won in and around Toronto by each party, we would award 16 of the 18 in Ontario to the Liberals and split the remaining two between the Conservatives and the NDP. If we take urban Toronto out of the equation and focus on suburban Toronto, we get 17 going to the Liberals and one for the Conservatives.

In 2008, the distribution goes 14 Liberal, three Conservative, and one NDP, or 14 Liberal and four Conservative focusing on the suburban part of Toronto only.

As for Alberta, in 2004 we would have to award one seat to the Liberals and the remaining four to the Conservatives. In 2008, all five would go Conservative. 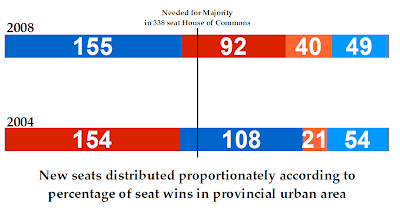 So, for 2004 that means only 154 (or 155 using the suburban Toronto numbers) Liberal MPs, far from the 170 needed for the slimmest of majorities. In 2008, this only gives 155 Conservative MPs (or 156 using the suburban Toronto numbers). If we allow that maybe one or two of the seats would be in the Ottawa area and a few others in southwestern Ontario, both areas where the Conservatives perform strongly, we still only get to about 160 MPs.

So, we need to start desperately searching for a majority, as we aren't going to get one using reasonable methods. So, let's assume a sweep. The 2006 election is not good for this, as it was a very close one. Giving the Conservatives a full sweep of all 30 new seats still only gives them 154 in that 2006 election. In 2004, even with a sweep of all 30 new seats (that means all 12 in British Columbia and Alberta, too) the Liberals still only win 165 seats, five short of a majority.

We finally get a majority in 2008 by giving the Conservatives all 30 new seats (including all 18, most of which will be in and around Toronto). But it is a majority of only three seats, and this in a climate where the Tories had an 11-point lead over the Liberals, who had their worst electoral result in history. We're talking best-best-best case scenario, and a virtually impossible sweep of the new seats, and still we only have a majority of three. A few people catch a cold and the government falls.

So in order for those new seats to deliver majority after majority, we need more than just the status quo. We need a dominate performance and the collapse of one or two parties. In other words, we need the parties to try to win the old-fashioned way and a complete redrawing of our political landscape. This can happen with 308 seats or 338 seats.

But wait, Wright (and the unquestioning Taber) asks "Why bother with Quebec?" If the Conservatives or Liberals are able to sweep all of these new seats west of the Ottawa River, they must be "ignoring" Quebec. Undoubtedly, ignoring Quebec is not going to gain a party any new seats. So, in this "ignore Quebec" scenario, let's give the Bloc the 54 seats they won in 2004. How does that change the situation? 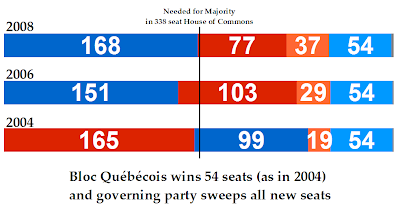 But let's say that the politicians take Wright's suggestion by the letter. They ignore Quebec completely, burn every bridge. In such a situation, I estimate the Bloc could win 65 seats, what I consider their "ceiling". Think you can form a government without Quebec? 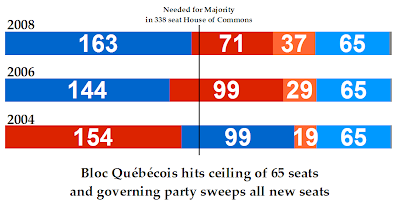 You can't. The Liberals are pushed to 16 short in 2004, the Conservatives are a whopping 26 seats short in 2006, and seven short in 2008. So, to be brief, a majority can't be formed without some respectable Quebec representation, even with the extra 30 seats in Ontario, British Columbia, and Alberta.

These are the results of cold calculations, which people who discard and denigrate Quebec do all the time. What good is our democracy if 1/4 of Canadians are ignored because some of them vote in a way that displeases the rest of the country? Quebecers who vote for the Bloc do so because they feel it speaks for them. If the federalist parties want Quebecers to vote for them, they need to reach out rather than expect them to tire of the party they have supported since Gilles Duceppe was first elected to the House of Commons 20 years ago.

Not good enough? What about the 1.5 million Quebecers who voted for federalist parties, hoping not to be ignored? That 62% represents almost five million people. Ignore them?

Alright, maybe some people are comfortable with that democratic deficit, but what about a party's finances? The NDP earned 440,000 votes in Quebec in 2008. Ignore them, and you also forfeit about $900,000 in funding every year. The Liberals got 860,000 votes in Quebec. That's about $1.7 million in funding.

And the Conservatives, who are being (and have been) most advised to ignore Quebec, would be throwing away the 785,000 votes they had in the province in 2008. That's $1.6 million in funding. Those votes are more than the votes the party earned in Prince Edward Island, Newfoundland & Labrador, New Brunswick, Nova Scotia, Manitoba, and Saskatchewan combined. It's about as many votes as the party earned in Alberta and British Columbia each. More Conservatives were elected in Quebec than in Manitoba, as well as all of Atlantic Canada. Ignore them?

If such a thing ever happened, the Bloc Québécois would indirectly have given Quebecers the best reason for supporting independence.

Ignoring Quebec is lazy, not smart politics. And banking on those new seats is not a smart investment.

The boundaries will only be redrawn after the constitutionally-mandated best-by date of this Conservative government has passed, so either way the parties will have to fight the next election with the current 308-seat House of Commons.

But if the Liberals and Conservatives think they can get a majority by ignoring Quebec and waiting until the boundaries are redrawn, they are sadly mistaken.
Posted by Éric at 8:29:00 AM