I've updated the pollster house effects chart for Angus-Reid in Canada and Quebec, incorporating the polling from the month of July 2010.

Nationally, the most favourable pollster for the Conservatives remains Ipsos-Reid, who has results for them 3.5 points higher than the average of the other pollsters. Their worst pollster is Harris-Decima, 2.4 points lower than the average.

The New Democrats' best pollster is Angus-Reid (+1.9) and their worst are Ipsos-Reid and Environics (-2.2).

Just for fun, let's tweak Angus-Reid's last national and Quebec numbers according to these latest findings: 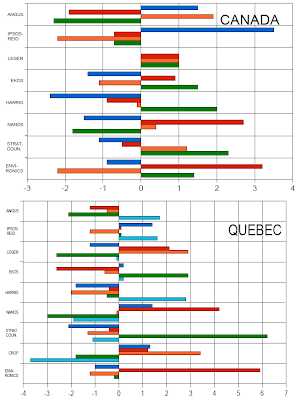