BC Liberals gain after Campbell resignation

The BC Liberals have rebounded in the first British Columbia provincial poll to be released after the announcement of Premier Gordon Campbell's eventual resignation. The Mustel Group, however, still shows that the BC New Democrats have the advantage. 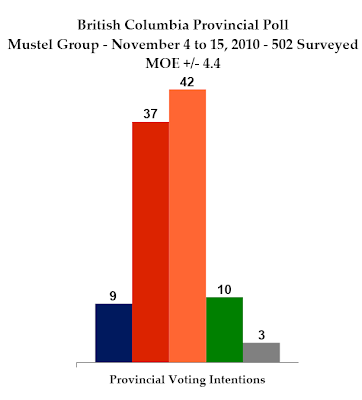 Compared to Mustel's last poll taken in late August and early September, the BC New Democrats have remained steady at 42%. That is, however, down from the high of 46% the party registered in Mustel's August 2009 poll.

The BC Liberals are up four points from September to 37%, their highest result since that August 2009 poll.

Meanwhile, the BC Greens are down two points to 10%, their lowest total since the 2009 election. The BC Conservatives are also down two points, to 9%, though they are still riding high compared to earlier polling results and the last election.

Undecideds represented 16% of this telephone poll.

The ability of the BC Liberals to recover is interesting, but the approval/disapproval rating of the NDP's leader, Carole James, is the most fascinating result of this poll. 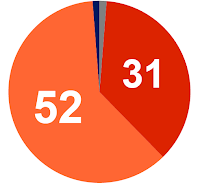 Nevertheless, with these polling results I project that the BC New Democrats would win a majority government of 52 seats, while the BC Liberals would form the Official Opposition with 31 seats.

That is closer than the 58 to 27 split I projected in Mustel's last poll.

While it is far, far too early to say that the worst is behind the BC Liberals, a poll like this will perhaps make leadership of the party a more attractive prospect.
Posted by Éric at 10:42:00 AM