Conservatives and Liberal below 30% in new EKOS poll

The latest poll from EKOS is a little more interesting than it usually has been, showing the Conservatives losing to the benefit of the New Democrats. But the poll has some odd regionals, as all polls seem to nowadays. 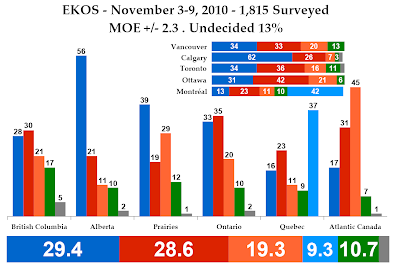 The Conservatives have dropped 4.5 points since EKOS's last poll two weeks ago, and have dropped below 30% again. The Liberals haven't really taken advantage, as they are up only 0.8 points to 28.6%.

The New Democrats, however, are up 4.2 points to 19.3%, thanks to big, and perhaps improbable, gains in the Prairies, Atlantic Canada, and Ontario.

The number of undecideds in this automated telephone poll (calling both landlines and cell phones) was 13%.

The Liberals now lead in Ontario with 34.8%, down one point from two weeks ago. The Conservatives have dropped eight to 32.9%, while the NDP is up six to 19.6%. None of these numbers are particularly suspect, though the variations are a little too large. Meanwhile, the Greens are up one to 10.3%. The Liberals lead in Toronto with 35.9% and in Ottawa with 42.3%, followed by the Conservatives with 34% and 31.2%, respectively.

In British Columbia, the Liberals have soared ahead and lead with 30.3%, up 11 points from two weeks ago. While that looks odd, we have seen a few other polls with the Liberals leading or performing very well. So, at the very least, we can say that there is some real potential for Liberal growth on the West Coast.

After single-handedly saving Atlantic Canada from a flood, Jack Layton now leads there with 44.5%, up 29 points. The Liberals are down six to 30.6% while the Conservatives, who caused the flood in the first place, are down 17 points to 17%.

Or, rather, probably not. This East Coast result is yet another example of why people need to look at polls with a critical eye. It's also a demonstration of why rolling averages and projection models like the one here at ThreeHundredEight.com are a better indication of what is actually going on. I get annoyed sometimes when individual polls are treated like gospel, when they are really just another dart on the board. For example, in Atlantic Canada and with the latest polls incorporated, the Liberals are projected to take 38.4% of the vote, compared to 31.2% for the Conservatives and 22.2% for the NDP. Which seems more likely? 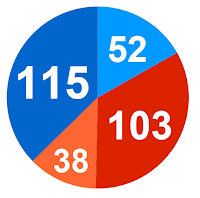 With this poll, the Conservatives would win 38 seats in Ontario (down 17 from the last EKOS projection), 27 in Alberta, 20 in Saskatchewan and Manitoba, 18 in British Columbia (+1), six in Quebec (+3), and five in Atlantic Canada (-4) for a total of 115. That is a drop of 17 seats from the projection based on the last EKOS poll.

The Bloc would win 52 seats in Quebec, a drop of two from last time.

The Greens lose the seat they were projected to win in British Columbia two weeks ago.

Also in this poll was a question about the F-35 purchase. Opinion is split, but 54% oppose the purchase of these new aircraft. Opposition is highest among Bloc Québécois (77%) and Liberal (64%) supporters, while support is highest among Conservative (70%) and New Democratic (47%) supporters.

But back to the voting intention numbers. Are the Conservatives and Liberals really both below 30%? I highly doubt it. Has the NDP surged forward in the Prairies, Ontario, and Atlantic Canada? Not likely. But what this poll does tell us is what every other poll has told us recently - Ontario and British Columbia are tight races, and a significant Tory advantage is far from in the cards.
Posted by Éric at 11:10:00 AM