Movement around the edges, but not much change in new Ipsos-Reid poll

It's been over a month since we've heard from Ipsos-Reid, as they were very busy during the municipal races in Ontario and elsewhere. Despite this, Ipsos-Reid has found very few changes among the top two parties, though there has been some movement for the New Democrats and the Bloc Québécois. 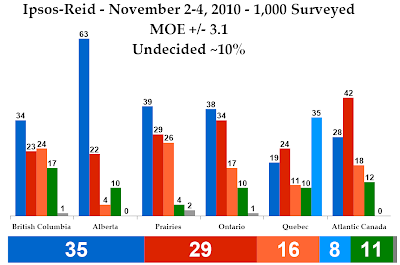 Compared to that last poll, the Conservatives and Liberals remain steady at 35% and 29%, respectively. It is the NDP that has moved, with a gain of four points. They now stand at 16%.

About 10% of the respondents to this prompted telephone poll were undecided.

In Ontario, the Conservatives have gained one point and lead with 38%. The Liberals are down three to 34%, while the NDP is up six to 17%. The Greens are down five to 10%. This would result in the Conservatives winning 52 seats, four more than in Ipsos-Reid's last poll. The Liberals would win 40 seats, eight fewer, while the NDP would win 14 (up five).

The Bloc has dropped nine points in Quebec but leads with 35%. The Liberals are up two to 24%, the Conservatives have gained three and now stand at 19%, and the NDP is up four to 11%. The Bloc would be projected to win 49 seats, compared to 16 Liberals, nine Conservatives, and one New Democrat. That is a loss of six seats for the Bloc from Ipsos-Reid's last poll, while the Conservatives gain three, the Liberals two, and the NDP one.

In British Columbia, the Conservatives lead with 34% (up one). The NDP is down two to 24% and the Liberals are down three to 23%. The Greens are up two to 17%. This would give 20 Conservative seats, nine Liberal seats, and seven NDP MPs.

In Alberta, the Conservatives have gained six points and lead with 63%, while the Liberals follow with 22%. The NDP has dropped five points to 4%. This would result in 26 Conservatives being elected and two Liberals. 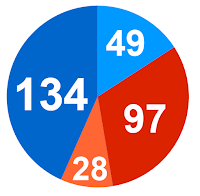 In total, the Conservatives would win 134 seats. That is a drop of two seats from Ipsos-Reid's last poll, and a drop of eight seats from the party's current standing in the House of Commons.

The Liberals would win 97 seats, down one, while the New Democrats would win 28 (up six).

This is another poll where we've seen the NDP make some gains - but this is more of a result of the severe drubbing the New Democrats were taking in September. The gap between the Liberals and Conservatives has widened a little compared to where it was a month or two ago, with the race in Ontario and British Columbia remaining close. But the Tories still appear unable to get back to their 2008 levels of support.
Posted by Éric at 1:18:00 PM