Taken shortly before Gordon Campbell's announcement that he would resign as BC Premier as soon as a replacement was found, an Angus-Reid poll placed the opposition BC New Democrats well ahead of Campbell's government. 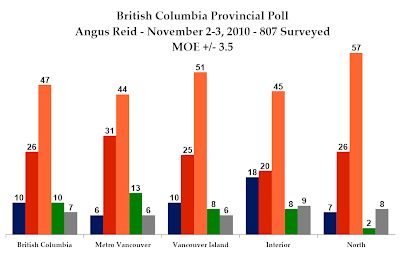 With 47%, the BC New Democrats had lost two points from Angus-Reid's last BC poll taken in mid-October, but still held a very comfortable lead. Campbell's BC Liberals were at 26%, a gain of two points but still well below the party's 2009 election result.

The BC Conservatives are running a strong third in the Interior, with 18%. 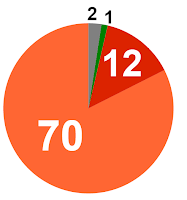 This poll would give the BC New Democrats a majority government with 70 seats. The party would sweep all 14 seats on Vancouver Island, and win 22 in the Interior, seven in the North, and 27 in and around Vancouver.

The Liberals would be reduced to 12 seats, all won in Vancouver.

UPDATE: I did not incorporate the "ballot box factor" in this projection. This is the difference between what pollsters report and what actually happens on voting day. I have added this factor to the projection model for British Columbia and will use it in the future. Had I used it for this projection, I would not have awarded a seat to the BC Greens. It would have gone to the BC Liberals instead.

If there is one bit of silver lining in this poll for the BC Liberals as they head into a leadership convention, it is that 28% of British Columbians prefer that the next electoral outcome be a BC Liberal government with someone other than Gordon Campbell as leader. But the NDP still holds the edge, with 32% preferring that they form the next government. Only 6% preferred a re-elected Campbell government.
Posted by Éric at 12:46:00 PM