We last heard from Abacus Data during the New Brunswick provincial election. They're a new pollster at the national level, and it's good to have another polling firm reporting.

Their newest poll shows an eight point lead for the Conservatives over the Liberals, but also has the New Democrats at a very high level of support. 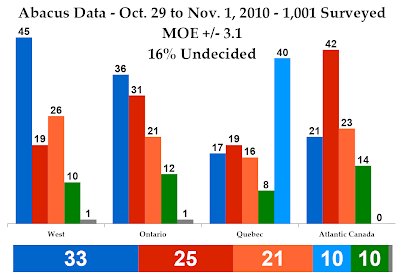 Abacus has found that the Conservatives are at 33%, which is certainly within the norm. They have the Liberals at 25% and the New Democrats at 21%, numbers which might raise a few eye-brows but look a lot more plausible when you consider the 3.1 point margin of error.

Abacus uses an online panel in its polls, much like Angus-Reid. The undecideds in this survey numbered 16%.

The Bloc leads in Quebec with 40%, while the Liberals, Conservatives, and New Democrats seem to be in a logjam. They're at 19%, 17%, and 16%, respectively. The Bloc takes advantage of the weakness of the three federalist parties, and would win 54 seats. The Liberals would win 13, the Conservative seven, and the NDP one.

The Liberals lead in Atlantic Canada with 42% and would win 23 seats. They are followed by the NDP at 23% (four seats) and the Conservatives at 21% (five seats). 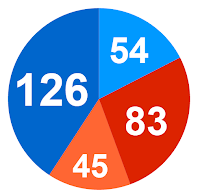 In total, the Conservatives would win 126 seats. While they hold a nice-sized lead, they are too weak to make any gains. The Liberals would win 83 seats, the Bloc 54, and the NDP 45. That would be an all-time best for Jack Layton's party.

Obviously, this poll is bad news for the Liberals. It isn't exactly stellar for the Conservatives, either, as they are doing badly east of Ontario and could even be doing better in that province.

It's terrific news for the NDP, but primarily because of the great result in Ontario.

It's difficult to look at a poll in isolation, but as this is Abacus's first, we have no choice. I look forward to seeing future polling results from Abacus Data, so that we can delve a little deeper into how the parties are faring.
Posted by Éric at 2:58:00 PM