Time for an update on the house effects chart. This month, I'm updating Harris-Decima and Nanos Research. See below for a full explanation of what these house effects measure.

On to Nanos. They did have some large disparities in October. They polled the Liberals 4.3 points higher than the average and the Conservatives 3.3 points higher. This was at the expense of the Greens, who they polled 5.2 points lower than average. Undoubtedly this is due to their method of not prompting party names in their questions.

So, just for giggles, let's apply these house effects to Harris-Decima's and Nanos' most recent national polls. The first number is the actual poll result, the second is what it becomes with the house effects.

Interestingly, the Liberals and Greens end up at similar results, with the disparity seeming to come between the Conservative and New Democratic results.

Much more of a variation here, though again the Liberal numbers are very similar.

The chart below tracks how each pollster tends to lean when calculating support levels for the various parties, as compared to the average polling results from other pollsters each month. This does not necessarily equate to a deliberate bias, but instead is more reflective of the polling methods used - the "house effects". This is also not a scientific calculation of any kind. Methodological differences, field dates, margins of error, and polls released vs. polls unreleased all play a role in these calculations. But it does give a little bit of an indication of how each pollster tends to compare to others - and only to each other. 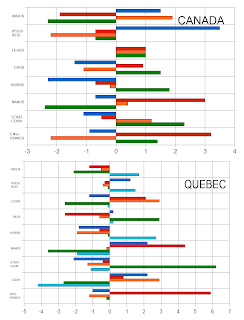