A survey of 1,067 Albertans conducted in early October by the Citizen Society Research Lab of Lethbridge College has found that the Progressive Conservatives have shed almost one-third of the support the party had in the March 2008 provincial election. 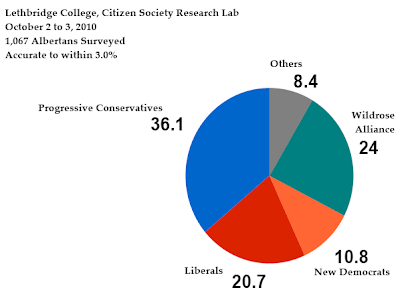 At 36.1 per cent, Mr. Stelmach has dropped 17 points, virtually all of which has gone to the Wildrose Alliance. This right-wing party, led by Danielle Smith, has the support of 24 per cent of Albertans. That is far more than the seven per cent the party earned a little over two years ago. Though the Wildrose Alliance did not win any seats on election night, the party currently holds four seats in the Alberta legislature as a result of defections and a by-election victory.

The provincial Liberals have lost about five points since 2008 and have the support of 20.7 per cent of Albertans, while the New Democrats have gained about three points and stand at 10.8 per cent support.

Other parties are at 8.4 per cent support, but as the provincial Green Party has dissolved and will not run in the next election (which must be held by 2013), much of that support will likely drift to the main parties.

Progressive Conservative losses throughout the province have been significant, with drops of approximately 15 points in Calgary and Edmonton and over 25 points in northern Alberta. While the Liberals have made some small gains outside of the two main cities, it is the Wildrose Alliance that has benefitted most from Mr. Stelmach’s difficulties. The party stands to take almost 30 per cent of the vote in Calgary and about 25 per cent in rural and small-town Alberta. Ms. Smith’s party is still having trouble breaking through in Edmonton, however, where the Wildrose Alliance has 16.3 per cent support. Nevertheless, that is a vast improvement over the two per cent the party received in and around Edmonton in the 2008 election.

The New Democrats have made gains in the province’s two urban centres. The party is running third in Edmonton with 19.8 per cent support, behind the Liberals at 24.2 per cent and the Progressive Conservatives at 33.3 per cent.

But despite having suffered double-digit losses throughout Alberta, the Progressive Conservatives are still poised to win a majority government thanks to vote splitting between the main opposition parties.

With these levels of support, Mr. Stelmach would be projected to win 59 seats in the Alberta legislature, which will see its current crop of 83 ridings increased by four before the next election. The Progressive Conservatives would likely take 32 of the 53 seats in and around Calgary and Edmonton, with 16 more seats coming in the north and 11 in southern Alberta.

The Liberals would form the Official Opposition with 12 seats. Five would likely be won in Edmonton, four in Calgary, and three in the southern portion of Alberta.

The Wildrose Alliance would elect 11 MLAs, almost tripling the party’s current representation in the legislature. Ms. Smith would be shut out of Edmonton, however, with seven of her party’s seats coming in Calgary.

The New Democrats would win five seats, their best electoral performance since 1989. All five would be won in the provincial capital.

Though the Progressive Conservatives still hold the advantage in Alberta, the Wildrose Alliance has made the party’s future in the province more insecure than it has been for a long time. If the Wildrose Alliance remains a force to be reckoned with, the next election could be the first unpredictable campaign Alberta has seen in almost twenty years.