NDP growth in Quebec in new Léger poll, but it's mostly useless

A new poll by Léger Marketing on the federal voting intentions of Quebecers bodes well for the New Democrats on first glance, but in actuality their growth in support will do them few favours in seat wins. 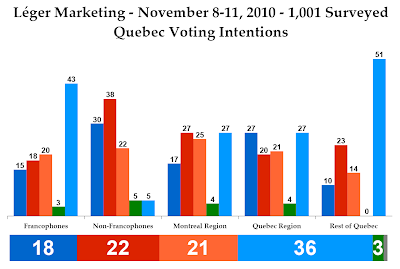 Compared to Léger's last poll taken between October 12 and October 14, the Bloc Québécois has lost only two points, and still holds the lead with 36%.

The NDP has made big gains amongst non-francophones, which has also boosted them in and around Montreal. The party now has the support of 22% of non-francophones, up 14 points, and 25% of Montrealers, up eight points.

But since that big gain seems to be primarily from anglophones and allophones, there is little hope for New Democratic seat gains. If the party runs at 22% on the West Island, it will not allow them to steal any seats away from the Liberals.

The Bloc still leads among francophones with 43%, down one point. The NDP is running second with 20%, a gain of one point, while the Liberals are steady at 18% and the Conservatives are up one to 15%.

Among non-francophones, the Liberals still retain the lead with 38%, but that is a drop of 11 points. The Conservatives are running second with 30%, up six, but like the NDP it will do them little good.

In Quebec City, both the Bloc and Tories have dropped two points. The Liberals have taken advantage, and are up four points to 20%.

Finally, in the rest of Quebec the Bloc is dominant, with 51% (up 10). While the results in Montreal and Quebec City might make a few Bloc MPs nervous, those outside of the two cities seem to be very safe. The Liberals are at 23% in this region (down one), while the Conservatives are down five to 10%. This can't help but make us wonder whether those Tories in the Saguenay and Bas-St-Laurent aren't at risk. 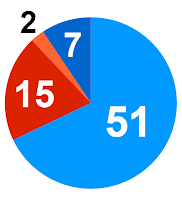 With these results, and with the federalist parties cannibalizing each other at such an alarming rate, the Bloc would win 51 seats. That is one more than Léger's last poll, and four more than the party's current standing in the House.

The Liberals would win 15 seats, up one from October, while the Tories would win seven (down two). The NDP would win two seats.

One thing that sets Léger's polls apart from the others is that the NDP does so well. The larger samples in Léger's polls would seem to argue that the NDP is closer to 20% than they are to the 10% or so other pollsters give them. But that is a huge disparity between the two. We should not discount Léger's findings, however, as during the 2008 election campaign they had the NDP at between 9% and 12%, exactly where the party ended up on voting day.
Posted by Éric at 12:21:00 PM