UPDATE: Fixed Dauphin-Swan River-Marquette comparison, as I was comparing it to my early November projection.

It was quite an exciting night, far more exciting than most by-elections are expected to be. There was one provincial and three federal by-elections last night, two of them being incredibly close races and a third being a huge surprise.

We'll start with the provincial by-election in Kamouraska-Témiscouata, a riding in eastern Quebec. It was billed as a test of the Parti Québécois, as an inability for them to win against Jean Charest at an all-time low in his popularity would be a huge mark against PQ leader Pauline Marois.

It was a close race, the lead going back and forth throughout the night. But in the end, the PQ's André Simard edged out the Liberal candidate France Dionne by 196 votes. 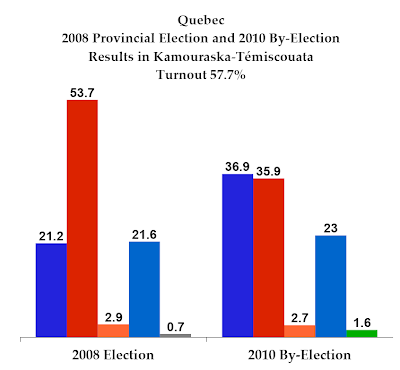 That it was a close race should not be a knock against the PQ. The party had not been a factor in the riding for years, and managed to increase its vote share by more than 15 points. They also increased their raw vote total by almost 3,000 votes - quite a feat in a by-election. The Liberals dropped almost 18 points, with the ADQ picking up a few percentage points but losing 73 votes. That is actually a remarkable performance for the ADQ, considering that they have virtually fallen off the face of the earth.

While the Crop poll of the riding did not choose the winner, with its margin of error it actually turned out to be pretty accurate. They had the PLQ at 34% to the PQ's 32% and the ADQ's 25%. They under-estimated PQ support by about five points, but was within two for the PLQ and ADQ.

Turnout was a very impressive 57.7%, high for a by-election.

Now on to the federal by-elections. I had a stake in the results considering my projections at the end of November and the ones posted yesterday. I knew I was going to take a drubbing in Winnipeg North, but I had no idea how to reflect the effect that Kevin Lamoureux would have on the race. And even then he out-performed my worst fears.

We'll start with Dauphin-Swan River-Marquette, which was the easiest one to call. The Conservatives did well enough in the race, dropping less than five points in Robert Sopuck's successful campaign. The New Democrats performed very well, increasing their vote share by almost 10 points while only losing about 1,100 votes to lower turnout. The Liberals sank a little, losing four points and 2,600 votes.

While my projection was off by about six to eight points between the Conservatives and New Democrats, I think the model performed pretty well. The order of the parties was correct, and the Liberal and Green totals were off by only five and two points, respectively. The strong NDP performance was unexpected. As the region has a few NDP representatives at the provincial level, I think that provincial electoral results need to be looked at next time, especially in provinces where provincial politics take centre stage.

Next, Vaughan. This was the race to watch, or at least that is what it was supposed to be. The narrative was that Julian Fantino's victory for the Conservatives would be a serious blow against Michael Ignatieff's leadership. But, it is hard to blame the Liberal leader for the loss here. Fantino was a star candidate and a good pick-up, and Tony Genco did far better than anyone expected.

In the end, the Conservatives gained almost 15 points and managed to retain all but 130 of their votes from the 2008 election. The Liberals lost about 9,500 votes, but less than 3 points on their vote share. The surprise, to me, was the collapse of the NDP. They went from 9.6% to only 1.7%, losing almost 5,000 voters. The Greens also performed very badly.

In this case, again my projection was right for the order of the parties. Picking Fantino to win by a small margin was the right call to make. The margin of error was 8 points, but that was the fault of the NDP. It was only six points for the two front-runners, so I am pretty pleased with how my projection model performed for Vaughan. The lesson to draw from this race is that a much-publicized personality contest can push second-tier parties out.

Winnipeg North (turnout 30.8%) was always going to be the problematic race for me. Liberal performances in the riding had been weak for a long time, and it was impossible to predict exactly how much of an effect Kevin Lamoureux would have on the race. As my post on star candidates pointed out, there can be some anomalies in the influence a notable local can have on an election. While my average factor was an increase of 14% of the vote share, the case of Jean-Pierre Blackburn, who increased his party's vote share by more than three times, is one that would have applied here. Had I used that as my modifier, I would have been much closer on the projection.

Nevertheless, the race was talked about as one for the NDP to lose. They should've had it in the bag, but when the votes were counted they had lost more than 21 points and almost 8,000 votes. The Liberals picked up a whopping 35 points and lured more than 5,000 new voters. One of the surprises was the weakness of the Conservative candidate, who lost 12 points and about 3,500 votes.

Obviously, the projection here was a complete and utter failure. The NDP's Kevin Chief and the Conservatives' Julie Javier under-performed, while Lamoureux surpassed all expectations. Even had I taken into account the provincial numbers here, I still wouldn't have had Lamoureux over 25%. His drawing power was completely unpredictable, and all I can really say about it is that any projection which would have given this result would not have been based on anything but a gut feeling.

All in all, I called 2 out of 3 correctly, with the margins of error in the two correctly-called races being a little outside of my comfort zone. The Winnipeg North projection was a failure and could not have been more wrong. But, there are lessons to be learned from these results, one of them being that projection by-elections may not be a very good idea.

As for the implications, I don't think there is anything earth-shattering in these results.

The PQ victory in Kamouraska-Témiscouata is good for the party and Marois' leadership, but it wasn't as disastrous for the Liberals as it could have been. Even the ADQ can take something away from the result.

Federally, the Conservatives can be pleased. They won Dauphin-Swan River-Marquette easily, and stole away a long-time Liberal riding in the GTA. But this isn't the beginning of the Liberal End Times - the Conservatives hold some neighbouring ridings. They also did not perform well in Winnipeg North, which is a blot on an otherwise successful night.

For Jack Layton, it was a very bad night. A better performance in Dauphin-Swan River-Marquette is little consolation for losing an NDP fortress and performing so abysmally in Vaughan.

The Liberals had some mixed results. Dauphin-Swan River-Marquette was no good, but it wasn't expected to be anything but no good. Losing Vaughan hurts the party, but they nevertheless performed very well with a relatively unknown candidate against a Conservative star, so I don't think they should lose too much sleep over it. Winning in Winnipeg North, though, is huge. This is an NDP riding, and they came from nowhere to win it. The results in Vaughan and Winnipeg North indicate that the Liberals are in a good position, as they are able to compete against the Conservatives when they shouldn't be able to, and are able to beat the NDP if they put an effort into it. They could be in a better position, but these results have them poised to give the Conservatives battle in Ontario and steal a few seats from the NDP.
Posted by Éric at 10:33:00 AM