A rare by-election poll was conducted by CROP for the riding of Kamouraska-Témiscouata, whose voters will be heading to the polls in less than a week. It shows a very close race, with the provincial Liberals, the Parti Québécois, and the ADQ within seven points of one another. 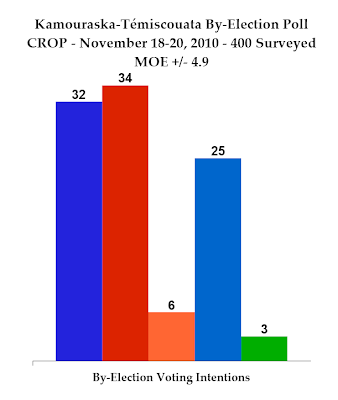 With 34%, France Dionne of the Liberals (PLQ) has a narrow two-point lead over André Simard of the PQ. With the 4.9% margin of error in this telephone poll, that puts them at a statistical tie.

With 25%, Gérald Beaulieu of the ADQ is not very far behind.

Serge Proulx of Québec Solidaire and Frédéric Brophy-Nolan of the provincial Greens bring up the rear with 6% and 3%, respectively. About 13% were undecided.

In other words, the PQ needs to up their "get out the vote" campaign if they want to win this riding, which they appear to be capable of doing.

Of course, it is a by-election and anything can happen. What's more, the margin of error is large in this poll and riding polls are notoriously unreliable, especially when you consider that 59% of people said they would vote. By-election turnout is usually about half of that.

This is a riding the PLQ should not lose, even in this political climate. The by-election was called after the death of Claude Béchard, who succumbed to the cancer he had been fighting for several years. He won the riding with 46% of the vote in 2003, dropped to 40% in 2007, and took 54% in 2008. That is a solid base of support for the Liberals.

Neither the Greens nor Québec Solidaire have ever had much traction here. 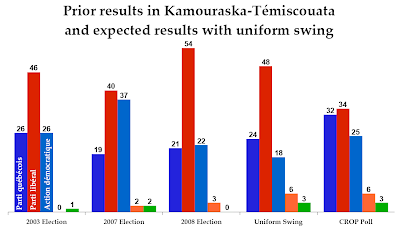 Using Léger Marketing's last provincial poll, and applying uniform swing to the 2008 electoral results (2007 for the Greens) according to how the vote has shifted, we still get a large Liberal lead: 48% to 24% for the PQ and 18% for the ADQ.

This seems unlikely, based on Quebecers' dissatisfaction with the Charest government at the moment, and how more unknown Dionne is as compared with Béchard.

We will have to wait and see. The election will be taking place on November 29, the same day as the three federal by-elections in Manitoba and Ontario.
Posted by Éric at 3:03:00 PM