The day before the federal government decided to block BHP Billiton's bid to take over Potash Corp., I wondered whether the claims that the Conservatives could stand to lose some or all of their 13 seats in Saskatchewan if the deal was allowed to go through had any merit.

Premier Brad Wall was giving every indication that he would fight the government tooth and nail over it, and the potential for an "Anything But Conservative" (ABC) campaign in Saskatchewan like the one that destroyed the Conservatives in Newfoundland & Labrador in 2008 was clear.

An Insightrix poll in mid-October pegged opposition to the deal at 55% in the province, while Angus-Reid found that 62% of people in Manitoba and Saskatchewan were in support of Wall's position. It's quite likely the numbers in Saskatchewan alone were quite higher than in Manitoba.

The latest provincial poll I could find for Saskatchewan was taken in November of last year, and it had Mr. Wall's Saskatchewan Party at 62%, followed by the New Democrats at 21%.

As the Saskatchewan Party held a pretty solid 60% throughout 2009, I decided to use that as my baseline.

Assuming Brad Wall could've conducted a similarly successful ABC campaign as Danny Williams did in 2008, what would be the result in Saskatchewan? As Williams' support is usually in the mid-70s, I assumed that Wall would be 80% as successful as Williams (60/75=0.8).

It cost the Conservatives the three seats they held of the province's seven, and knocked the Tories out of contention in the three other seats that they had lost by 15 or fewer points in 2006.

Using that as my base and reducing it by the 20% disparity between Wall's and Williams' popularity, I came to the figure of a vote drop of 48.9% for the Conservatives in Saskatchewan. I then portioned the lost votes to the other parties according to their share of the vote in each riding in 2008. 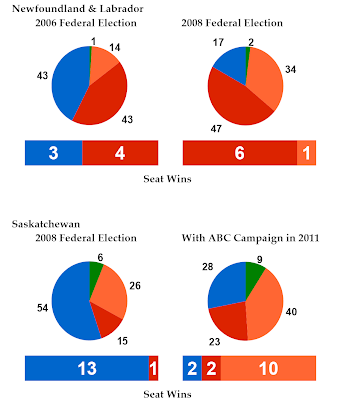 From 13 seats, the Conservatives would be reduced to only two, with the Liberals picking up one seat and the NDP picking up the other ten.

The two ridings the Conservatives would retain are Cypress Hills-Grasslands and Souris-Moose Mountain. In the former, the Tories would hold a 33% to 30% lead over the NDP. In the latter, the vote would be split at 36% apiece, with the Tories having the tiniest of advantages.

The Liberal pick-up would by Desnethé-Missinippi-Churchill River, with 43% of the vote against 24% for the Conservatives, while Raplh Goodale would cruise in Wascana.

The Tories would be in the running in a few other ridings, namely Saskatoon-Wanuskewin (29% to the NDP's 40%) and Yorkton-Melville (35% to the NDP's 43%), while they would be within 13 points of the NDP in Battlefords-Lloydminster and Blackstrap.

It's hard to believe, but few would have thought it possible for the Conservatives to be so roughly handled on the Rock, and Western Alienation might just be as strong a force as Newfoundlander provincialism (nationalism?).

Of course, this was just a rough exercise. More plausibly the Conservatives would be reduced from 13 seats to the six that I mentioned above, or more. But the potential for catastrophic loss is there.

It appears that the Conservatives made some of the same calculations that I did. And considering that Wall has allies in the premiers of Alberta and Manitoba, there was a risk that a Wall-led ABC campaign could have spilled over into neighbouring provinces, which wasn't a risk with Williams.

In the end, Wall was profuse in his thanks to the federal government for blocking the deal, so this ABC campaign will not come to pass. But it is an interesting look at what could've happened, and an indication of how powerful a popular provincial premier can be.
Posted by Éric at 2:43:00 PM