The provincial poll released by Léger Marketing at the beginning of the week shows that the provincial Liberals have recovered, and are now within four points of the Parti Québécois. 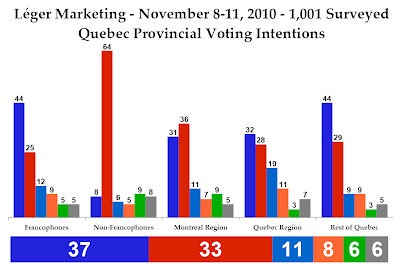 While normally I would compare these results to Léger's last poll, taken in mid-October, I'm not going to do that this time. That poll had a huge and improbable result for "Other", due to all the talk surrounding the hypothetical Force Québec party. So, rather than talk about the PQ and PLQ gaining in this poll (which they both do as a result of the reduction of the "Other" vote by seven points), I will compare this poll to Léger's September poll.

Compared to two months ago, the Parti Québécois has dropped three points to 37%, but has retained the lead. The Liberals are up one to 33%, while the Action Démocratique du Québec is at 11%, down one. Québec Solidaire is down three points to 8%, while the Greens (PVQ) are steady at 6%.

The PQ's losses came primarily among francophones and in Montreal, while the PLQ gain is due to an increase in support in and around Quebec City.

In the provincial capital, the PQ leads with 32%, down two points. The Liberals are up three to 28%, while the ADQ is down a disastrous nine points to 19%. The Quebec City region is the bread and butter of the ADQ, and for them to be dropping so much is a very dangerous thing for the party.

In the rest of Quebec, the PQ is in the lead with 44%, unchanged from two months ago. The PLQ is up one to 29% while the ADQ is down two points to 9%, tied with Québec Solidaire.

Among francophones, who make up 80% of the province's population, the PQ leads with 44%, down four points. The Liberals are second with 25%, up one, while the ADQ is also up one to 12%.

Léger also asked how people would vote if the PQ promises to hold a referendum on independence in their first mandate. The result was hardly different, but was slightly worse for the PQ: 36% to the Liberals' 35%. 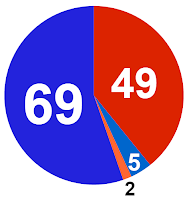 These results would give the Parti Québécois a majority government with 69 seats, compared to 49 for the Liberals. The ADQ would win five seats while Québec Solidaire would win two, electing Françoise David in Gouin in addition to Amir Khadir in Mercier.

This is hardly changed from the September projection of 70 seats for the PQ, 48 for the Liberals, five for the ADQ, and two for Québec Solidaire.

Speaking of party leaders, Pauline Marois is the first choice of Quebecers to be the next Premier, with 22% (or 39% of decideds). Jean Charest gets the nod from 16% of Quebecers (or 28%), while Khadir gets 9% (16%) and Gérard Deltell of the ADQ gets 8% (or 14%). Remarkably, Khadir is preferred by twice as many Quebecers as those who would vote for his party. This indicates that Québec Solidaire has the best chance for growth.

But with only 18% satisfied with his government, Jean Charest does have the potential to flatline.
Posted by Éric at 2:30:00 PM