Ipsos-Reid's latest poll on the provincial political situation in Ontario shows that Tim Hudak's Progressive Conservatives have taken a decisive lead and are set to form a majority government in the province's next election. 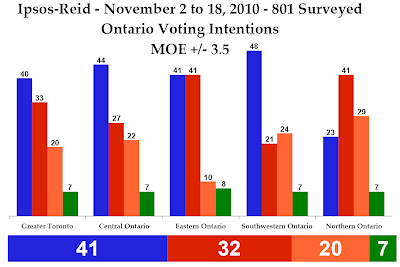 Compared to Ipsos-Reid's last provincial poll taken in August, the Progressive Conservatives have gained five points and now lead with 41%. The Ontario Liberals are down three points to 32%, while the New Democrats are up two to 20%.

The Ontario Greens have dropped four points and now stand at 7%.

The Progressive Conservative gain and Liberal loss is not far outside the margin of error, but it has turned a one-point gap into a nine-point gap between the two parties.

Before getting into the regional results, it is worth noting the huge disparity between the voting intentions of men and women. The Progressive Conservatives have a massive lead among men, with 50% support compared to the Liberals' 30% (and the NDP's 16%). But among women, the Liberals actually lead: 34% to the PC's 32% and the NDP's 25%. We've seen this kind of unbalance at the federal level, but never anything so pronounced.

Surprisingly, the biggest gain for the Progressive Conservatives has come in the Greater Toronto region. They've jumped 11 points to 40% in the provincial capital, while the Liberals are down nine points to 33%. The NDP is relatively steady, gaining two points to reach 20%.

The PCs also lead in central and southwestern Ontario, with 44% and 48%, respectively. They've been holding steady there, as have the Liberals at 27% and 21%, respectively. The New Democrats have made a move in these regions, however. They've gained four points in central Ontario (22%) and have moved into second place in southwestern Ontario with a six point gain (24%).

It is a much closer race in the eastern part of the province, where the PCs and Liberals are neck-and-neck at 41%. That is a six point drop for the Progressive Conservatives and a nine-point gain for the Liberals. The NDP is not a factor here, with 10% support.

The one region in which Dalton McGuinty's party leads is in the north. The Liberals have jumped seven points there and lead with 41%. The NDP and Progressive Conservatives are holding steady with 29% and 23%, respectively. 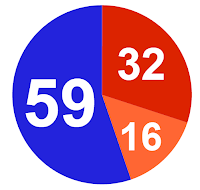 With this poll, the Progressive Conservatives would win 59 seats and form a majority government. The Liberals would form the Official Opposition with 32 seats, while the New Democrats would win 16.

That represents a loss of 40 seats from the Liberals' current standing in the Legislative Assembly. It's a gain of 34 for the Progressive Conservatives and six for the NDP. It's also a gain of eight seats for the PCs compared to the projection for Ipsos-Reid's last poll, a gain of one seat for the NDP, and a loss of nine for the Liberals.

Less than a year remains before the next provincial election in Ontario. There is not much time for Mr. McGuinty to dig himself out of the hole he is currently in. With the Ontario Liberals seeming to be piling problem onto problem, all Mr. Hudak has to do is hold steady and appear to be a competent alternative and he should coast to the premiership.
Posted by Éric at 9:33:00 AM