The latest poll from Harris-Decima shows Conservative gains and Liberal losses within the margin of error at the national level, but also a New Democratic surge of three points, outside of the poll's 2.2 MOE. 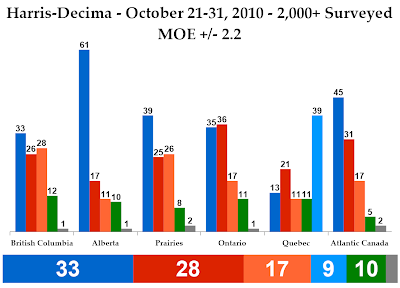 Compared to Harris-Decima's last poll in mid-October, the Conservatives have gained one point and lead with 33%. The Liberals are down two to 28%, while the New Democrats are now at 17%.

The Greens are unchanged at 10% and the Bloc Québécois is down one to 9%.

The data from this telephone poll does not include the number of undecided Canadians.

The three-point gain for the NDP puts them back into a good position. Their gains came primarily in Ontario, but also in British Columbia and Quebec.

In Ontario, the NDP gained five points and now stand at 17%. The Liberals lead with 36%, down two, while the Conservatives have dropped four to 35%. The Greens are up one to 11%. This would result in 48 Liberal seats, 43 Conservative seats, and 15 seats for the NDP. That's a loss of seven seats for the Tories compared to Harris-Decima's last poll, and a gain of eight for the NDP.

In Quebec, the Bloc is down four points but still leads with 39%. The Liberals are down two to 21% while the Conservatives are steady at a woeful 13%. The NDP is up one to 11%. The Bloc would win 55 seats, unchanged from the last poll, while the Liberals would win 15, the Conservative four, and the NDP one. These projections are also unchanged.

The Conservatives are up eight points in Alberta to 61%, and are projected to win all 28 seats. That removes the one NDP and one Liberal seat here from the last poll.

And in the Prairies, the Conservatives lead with 39%, followed by the NDP at 26%. This would result in 19 Conservative seats (down two), five Liberal seats (up one), and four NDP seats (also up one). 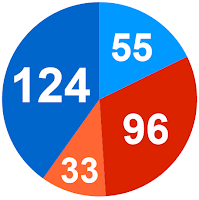 In total, the Conservatives would win 124 seats, down one from Harris-Decima's last poll. The Liberals would elect 96 MPs, down seven, while the NDP would elect 33, up eight. The Bloc is unchanged at 55 seats.

Troublesome for the Tories is that the Liberals and NDP could combine for 129 seats, five more than the Conservatives are projected to win in this poll.

Though at first glance it would seem that the good news is for the Conservatives, who have widened the gap between themselves and the Liberals to five points, the reality is that this would change very little for Stephen Harper in terms of seats. He actually loses one from the last poll and 18 from his current caucus, with the New Democrats taking full advantage. At 33 seats, this is still a net loss for the NDP compared to the 36 they have now, but in terms of trends this poll is good for Jack Layton.
Posted by Éric at 11:34:00 AM