The Conservatives have made a gain of almost four points since EKOS's last publicly released poll two weeks ago, putting the gap between themselves and the Liberals back to a little over six points. 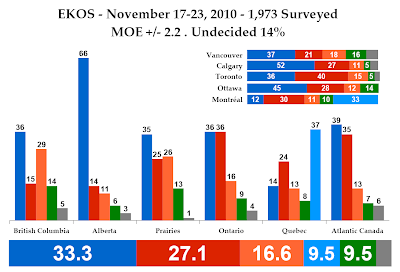 Compared to two weeks ago, the Conservatives have gained 3.9 points and now lead with 33.3% of the vote. Polling over the last two weeks have shown some progression for the Tories, as they were at 32.4% support last week.

The Liberals are down 1.5 points from two weeks ago, and are now at 27.1%. They were holding relatively steady at 28.7% last week.

The New Democrats have sunk from their high in EKOS's last poll, and are down 2.7 points to 16.6%. About four-fifths of this loss, however, is due to the results in Atlantic Canada resetting themselves to something more plausible than the 46% the party had in the region two weeks ago.

The proportion of undecideds in this automated telephone poll was 14%, up one from two weeks ago.

The Liberals and Conservatives are tied in Ontario with 35.5% apiece, representing a gain of one point for the Liberals (from two weeks ago, which will be the comparison point for the remainder of this post) and a gain of three points for the Conservatives. The NDP is down four points to 15.6%, while the Greens are down one to 9.4%. Note the high "Other" result here: 4%.

On that note, let me take this opportunity to say that the projection model has been tweaked to do away with these high and virtually impossible "Other" results. This will be shown in the next update.

The Liberals still lead in Toronto with 39.6% to the Conservatives' 36.1%, but the narrow margin does not bode well for Tony Genco and the Liberals in the Vaughan by-election. The Tories have taken the lead in Ottawa after trailing for several months, with 45.3% to the Liberals' 28.2%.

Big movement in British Columbia, as the Conservatives jump eight points to 35.7%. The NDP has also made a large gain, up nine points to 29.2%. The Liberals have dropped 15 to 15.4%, while the Greens are down three to 14.4%. One wonders whether the Campbell resignation has played a role in these wide variations. The Tories lead in Vancouver with 36.5%, followed by the Liberals at 20.7%.

As noted, things have swung the other way in Atlantic Canada. But it appears the swing might have been too violent, as the Conservatives have gained 22 points and now lead with 38.9%, followed by the Liberals at 35.2% (up four). The NDP is down 32 (!) points to 12.5%. Clearly, these changes are due to the small sample size, but having the Liberals and Conservatives in the 30s and the NDP in the teens is more likely than the odd result two weeks ago.

Finally, in the Prairies the Conservatives are down four but still lead with 35.1%. The NDP is down three to 25.9% while the Liberals are up six to 25.3%. 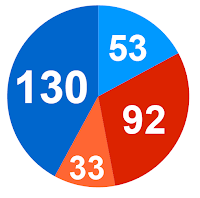 The Bloc Québécois would win 53 seats in Quebec, up one from the last poll.

There's not much to say about this poll. As I pointed out in my Hill Times column this week, this size of a Conservative lead has been the standard since April 2010. It is narrow enough to entail a good deal of risk for both the Liberals and Conservatives. Both parties could do much worse than 2008, much better, or about the same in a new election - there are no guarantees or even a strong likelihood of any result at this point.
Posted by Éric at 9:48:00 AM