A new poll released today by Nanos Research shows very little movement for any party since early October, though the New Democrats have made some seat gains at the expense of the Liberals. 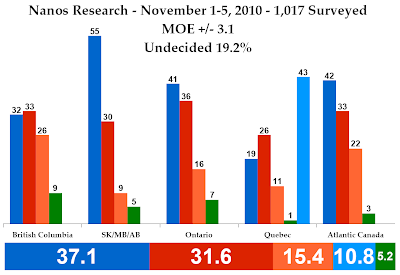 Compared to that early October poll, the Conservatives have gained 0.5 points and lead with 37.1%. The Liberals follow with 31.6%, down 0.8 points.

The number of undecided in this unprompted telephone poll were 19.2%.

Stephen Harper is the best option for Prime Minister for 28.4% of respondents, compared to 16.4% for Jack Layton and 15.5% for Michael Ignatieff. That represents little change from Nanos' last poll.

Harper does best in the Prairies (Alberta, Saskatchewan, and Manitoba) with 45.9%, while he does worst in Quebec with 14.1%. He has a much bigger spread than either Layton or Ignatieff, indicating how his support is regionally based.

Nanos persists in grouping Alberta with the other two Prairie provinces. The Conservatives lead there with 55.2%, followed by the Liberals at 30.4%. 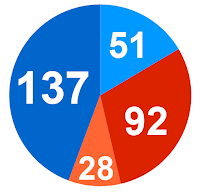 In total, the Conservatives would win 137 seats, unchanged from Nanos' last poll. The Liberals would win 92, a loss of six seats, while the NDP would win 28 for a gain of four. The Bloc picks up two.

Of course, that is still a net gain for the Liberals, who currently hold 76 seats in the House of Commons. But a loss of only five seats for the Tories and a maintenance of the 2008 level of popular support would likely mean another two or three years of Conservative governance.
Posted by Éric at 1:10:00 PM