Updated by-election projections, and their likelihood

Regular readers of this blog will remember my by-election projections which appeared in The Globe and Mail at the beginning of the month. What was intended as a small exercise and an attempt at projecting today's by-elections with numbers alone became an article which raised the ire of a few commentators and was referenced as a "poll" for much of the campaign. Some have gone so far as to allege that I fudged the numbers for effect, something that is both quite insulting as well as being completely wrong.

As today is voting day for the three by-elections in Manitoba and Ontario, it seems like a good day to update the projections that I made in early November, using the same methodology. I will, however, add the "star candidate" factor I identified in a recent post.

First, I will explain the methodology that will be used this time and was used last time. To start, I've taken the election result from 2008 and adjusted it according to the proportional change that has occurred in the province (or region for Manitoba) since that election.

I then take these results and adjust them by the "by-election factor". This was determined by taking the average difference in the 2009 by-election results from what was expected using the same formula as the one described above. As I have my projection data from November 2009 I was able to replicate what I am doing for the 2010 by-elections.

Applying these factors to the expected result gives me my by-election projection. I then adjust the numbers proportionately to total 100%. When doing this calculation in early November, I ended up with the Liberals and Conservatives tied at 42% in Vaughan. Before the adjustment to total 100%, they were even tied at 39.4%. No fudging, it was really that close.

I then took these numbers and compared them to the historical election results in the three ridings. After looking into each of the ridings in-depth, I felt comfortable that they were plausible and went ahead with writing my article for The Globe and Mail.

But for this update, I am adding the "star candidate" factor to Kevin Lamoureux in Winnipeg North and Julian Fantino in Vaughan.

The results are that the New Democrats and Conservatives would hold on to their Manitoba seats, while the Conservatives gain Vaughan. 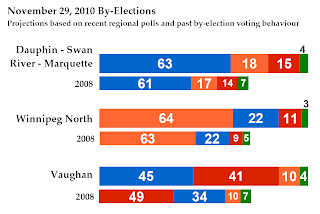 In Dauphin-Swan River-Marquette, Robert Sopuck of the Conservatives would win with 63%, down three points from the earlier by-election projection. The NDP would finish second with 18% (up one), the Liberals third with 15% (up two), and the Greens fourth with 4% (up one). I consider this projection to be likely.

In Vaughan, the projection gives Julian Fantino of the Conservatives 45% (up three), and the win. The Liberals finish a close second with 41%, down one, while the NDP and Greens finish with 10% and 4%, respectively. This seems like a very plausible result to me, though personally I would not be surprised to also see the Liberals win by as much as 10 points. It really is a toss-up.

In Winnipeg North, these calculations would give Kevin Chief of the NDP the win with 64%, down one from the earlier projection. The Conservatives would finish second with 22% (down two) and the Liberals third with 11% (up two). The Greens would place fourth with 3%, down one.

Winnipeg North shows the limitations of projecting by-elections. Unlike a federal election, where these sorts of calculations would have a better chance of proving accurate because of the over-riding influence of a national campaign, by-elections are subject to local issues and fluctuations that I cannot project. I am unable to give Lamoureux more of the vote without adjusting the numbers by my own judgment. I think Lamoureux will probably finish second to Chief, but even applying the "star candidate" factor cannot get his numbers close to the Conservative candidate.

We shall see tonight what the results will be. I think that these three winners are the most likely trio. As to the implications, I think people are blowing it way out of proportion. The results in Manitoba won't have any leadership or national implications unless there is an upset. If the Liberals win in Vaughan, it will be because of a strong Genco campaign and a weak Fantino campaign, and because Vaughan has been Liberal for so very long. If the Conservatives win, it will be because Fantino was a good catch for the Conservatives, and because Vaughan was more of a Bevilacqua riding than a Liberal one. People aren't voting for Stephen Harper or Michael Ignatieff in the Vaughan by-election. While losing it would be bad news for the Liberal leader, it wouldn't be his fault anymore than an upset in Winnipeg North would be Jack Layton's.

I won't be doing any live-blogging of the by-election results, but will probably be commenting on Twitter.
Posted by Éric at 10:54:00 AM