The 2008 Election: Four Other Scenarios

Earlier this week, I looked at what the 2008 election would have looked like if Canada had a two-party system. Using the "second choice" polling and the UBC election forecaster as in that post, I've looked at four other scenarios. 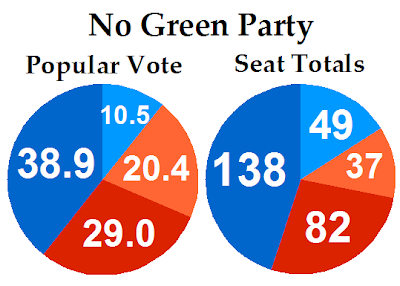 In this first scenario, during the summer of 2008 the Green Party disbands. Whether it is because they decide not to split the environmentalist vote, they run out of money, or because of some scandal, it's up to you.

All parties increase their popular vote, but only the Liberals take a few more seats than they did in the actual election. Neither the Bloc nor the NDP benefit much from the disappearance of the Greens. This really puts a damper on the claims that the Greens play a significant role in keeping the Conservatives in government. 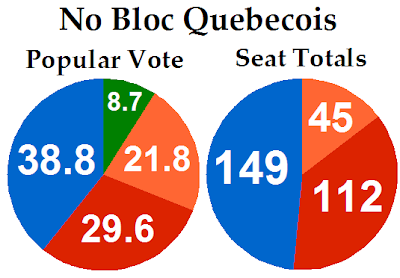 In this scenario, the Bloc Quebecois disbands to, say, focus on the next provincial election in Quebec.

This does make a big difference in the election. About 37% of Bloc voters go to the Liberals, 33% go to the NDP, 19% go to the Greens, and 11% go to the Conservatives. The national popular vote does not change radically, again, but all parties make some gains.

In terms of seats, this gives the Conservatives an extra six seats in the province, bringing them onto the doorstep of a majority with 149 seats. The Liberals make huge gains in Quebec, winning about 35 seats in the province. However, with 112 seats, they're still only the official opposition. The NDP also makes big strides in the province, winning nine seats in all. Most of them come on the island of Montreal, but the others come in Gatineau, Drummondville, and St-Hyacinthe. With 157 seats, an NDP-Liberal coalition government is possible. 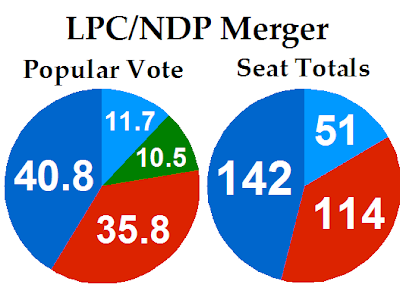 In this next scenario, the Liberals and NDP agree to a merger in order to stop the Conservatives from forming another government.

The result is another Conservative minority government. This pushes the Tories over 40% but inflates the Liberal result to almost 36%. The Bloc also benefits, as do the Greens. The Bloc wins two more seats and gets 51, but the Greens still do not elect anyone. 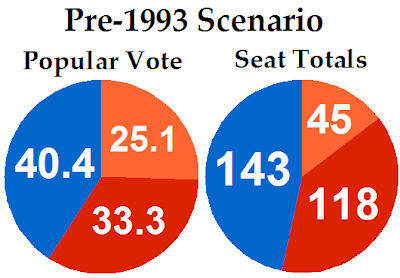 This last scenario is the most unlikely, but assumes that both the Greens and the Bloc disappear during the summer of 2008.

The result is, again, a Conservative minority of, again, 143 seats. The Liberals make the biggest gains, going from 26% to 33% and taking 118 seats. The NDP also benefits, pushing its vote up to a massive 25% and taking 45 seats. Here again, a Liberal/NDP coalition is possible as the two parties hold 163 seats.

With these results, an argument can be made that Jack Layton is doing as well as Ed Broadbent did in the 1980s. The problem is that Broadbent didn't have to deal with the Greens and the Bloc Quebecois. In fact, when you remove the Bloc from the equation, Layton would be making the kind of strides in Quebec that Broadbent could have only dreamed of.

As some of you have pointed out, these don't add up to 308 seats, but that is because of independents.

An interesting little exercise to mull over the weekend. It shows how well the Conservatives did in the last election. Only by eliminating the Bloc, Greens, and NDP did the Liberals have a chance to win the most seats.
Posted by Éric at 10:24:00 AM