It's time to look at the polling average over the month of September. Sixteen national polls were taken during this month, totalling about 29,600 interviews. Here are the results we get at the national level, with the difference from last month's average in brackets.

The Conservatives show a big jump of more than two points, but not all of it came from the Liberals. They sank 0.8 points while the NDP also took a hit of 0.7 points. The Bloc made a modest gain of 0.4 points while the Greens posted the worst showing of all with a loss of 1.3 points. The seat projection for these results is as follows, with the difference from last month in brackets:

The Conservatives make a big nine-seat gain at the expense of the Liberals, who drop ten. The NDP also pick up one, but the Liberals and NDP now do not have the ability to outvote the Tories alone. 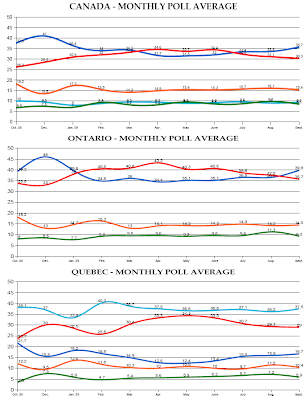 The Conservatives gain a good amount of ground, but it really is only making up for their four-point loss in August. Another month of Liberal loss means the party is down 1.7 points from July, while the NDP drop is compensated by August's three-point gain. The Greens have lost the gains they made in August. We'll call that the May bump.

The Liberals make a modest gain but it doesn't compare to their two-point loss in August.

Another modest gain for the Conservatives (up a full point since July) while the Liberals lose most of the gains they made in August. The NDP lose a little but have actually consolidated their August gains, and are now second place in the region.

A huge gain in Ontario, where the Tories have really made a move. The Liberals have lost almost two points this month and almost three points in the last two months. They've also lost the lead in the province. The NDP has tread water, but is still far below where they need to be.

The Bloc more than makes up for the hit they took in August, and now have an 8.5-point lead. A good Conservative gain in Quebec puts them still four points behind their 2008 electoral result. The Liberals, despite all the brouhaha, have only dropped 0.3 points - though that makes two points since July. The NDP has lost the ground it made last month.

And the biggest gain of the month goes to the Liberals - almost five points in Atlantic Canada. A strong performance by the Tories really only makes up for the losses they sustained last month, and puts them out of the range of the NDP who has lost some more ground.

By far, the Conservatives had the best month. They made gains in five out of six regions, with their one loss being in Alberta, and that only of 0.1 points. They made huge gains in Ontario and have made good their recent losses in British Columbia and Atlantic Canada.

The Bloc had a good month in Quebec.

The Liberals, surprisingly, had the next best month. They made gains in two regions and losses in the other four. The gain in Atlantic Canada was big and important, but the one in Alberta was small and, probably, useless. The losses in the rest of the country were less than one point, except in Ontario where the party desperately needs to improve/

Both the NDP and the Greens had bad months, losing in five regions. The Greens, especially, had large losses but the NDP also had large one-point losses in several regions.
Posted by Éric at 12:09:00 PM