Some of the discussion in the comment sections have swirled around the question of comparing federal parties to provincial parties, particularly in Alberta and British Columbia. This made me wonder how electoral results at the two levels compare, and whether we can draw any conclusions from that comparison.

So, I decided to take a look at it. Since there are ten provinces and that would take a while, I've started with the two most populous: Ontario and Quebec. I'll look at the other provinces in the future. 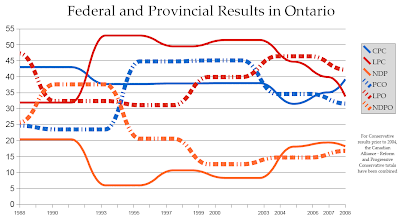 As you can see on the chart, the results don't match-up exactly. But there are a few interesting things we can see.

Firstly, it appears that since 2000, the federal parties have been getting results similar to their provincial counterparts, with only a few points-worth of difference.

Thirdly, out of all of the party-twinnings, the support of the provincial New Democrats most closely aligns with that of its federal counterpart, especially since 1999. And when they weren't close in popular vote support, the two levels of the party matched each other in trends. The federal NDP took a sharp hit in 1993, matched by the provincial party's trouble in 1995.

If we want to take that further and average-out the two levels of support, about 41.7% of Ontarians can be considered to be Liberal supporters, 35.8% are Conservative supporters, and 17.9% are New Democrats. This doesn't mean anything concrete, but is a good indication of whether a party is under- or over-performing. Looking at it this way, the federal Conservatives are currently punching above their weight and the federal Liberals well below their weight. The federal NDP are under-achieving a little bit as well. 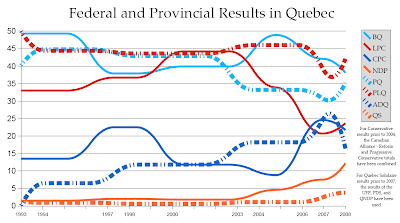 Quebec doesn't align as nicely as Ontario, but we can draw some comparisons between the various parties.

Obviously, the Bloc Quebecois and Parti Quebecois align very closely. But after that it is not as close. The Action Démocratique and the Conservatives seem to be soul-brothers, while the NDP can find itself in Québec Solidaire, except for that party's support for sovereignty. The fore-runners of QS, those being the Union des Forces Progressistes, the Parti de la démocratie socialiste, and the Quebec NDP, can give us a basis of comparison for NDP support prior to 2007.

The biggest problem with aligning Quebec at the provincial and federal level is the Liberals. The two parties don't co-operate much and are not part of the same organisation. But, for the purposes of this analysis, it's what we'll work with. The two parties do, certainly, have the same bases of support in the province.

So, what strikes us when we look at this chart?

Secondly, the NDP and its provincial counter-parts also have the same foundation of support and follow similar trendlines.

Thirdly, following the 1995 referendum and up until the sponsorship scandal, the BQ/LPC and PQ/PLQ were in a neck-and-neck race, with both parties having about the same level of support. In 2003, however, things diverged. The provincial Liberals managed to sustain high-levels of support, while the Parti Quebecois faltered. The Bloc Quebecois, however, flourished while the federal Liberals fell sharply.

Fourthly, what we also see is that the two parties tend to match each other in trends at each level of government. From 2004, both the Liberals and Bloc Quebecois saw their support level fall away, as did the provincial Liberals and the Parti Quebecois. This coincided with the rise of the ADQ and the Conservatives, seemingly indicating that both the Liberals and the BQ/PQ suffered equally from the increase in right-wing support. However, we also see that the federal Liberals and Conservatives tend to mirror each other, indicating that they share more of the same voters than the BQ does with the Conservatives. In fact, part of the BQ's recent dip coincides with the emergence of the NDP as a player.

In terms of average support since 1993, the Bloc Quebecois has had about 42.7% support while the Parti Quebecois has had 36.9%. The federal Liberals have had about 32.0% support, as compared to the 41.8% of their provincial doppelgangers. The federal Conservatives average 17.2% support to the ADQ's 16.7%. The New Democrats average 4.9% support, while the left-wing parties in Quebec have averaged 2.0% support.

So, taking it further, as with Ontario, 39.8% of Quebecers can be counted on to vote sovereigntist, while 36.9% will vote Liberal of some sort. About 17.0% can be considered supporters of right-wing parties, while 3.5% will vote for left-wing parties. In these terms, the Bloc is under-performing a little, the Liberals are under-performing a lot, and the Conservatives and NDP are both hitting well above their weight.