EKOS has released its weekly poll this morning, taken between September 23 and September 29 and involved 3,216 Canadians. The result:

This represents small losses for the Conservatives and Liberals, and modest gains for the NDP. But this is just what we've seen over the last little while, so nothing new here. The Tory lead seems to have plateaued, while the Liberal vote has seemed to have bottomed out. The NDP are still in a very worrisome position.

The regionals are consistent with what the other polling firms have reported over the last week.

The big Conservative lead in Ontario seems to be narrowing of late, with the Conservatives at 40.2% and the Liberals at 35.7%. The NDP is at 13.4%. 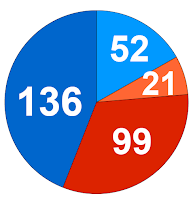 Some better results for the Liberals then we've been seeing, and the Bloc would certainly be happy with 52.

The poll also featured some other topics. 38% of Canadians are embarrassed with Canada's environmental record, while 23% are proud and 29% are neither.

The mission in Afghanistan is unpopular, with 33% supporting it and 52% opposing it. The breakdown by party affiliation is interesting, as 49% of Conservatives support the mission compared to 34% who don't. Meanwhile, 55% of Liberals oppose the mission compared to 31% who support it. The Bloc's voters are most adamant about the war, with 75% opposed and only 14% in favour.

Nanos has released the results of an older poll, taken between September 3 and September 11 and involving 1,002 Canadians. It has to do with government and elections.

74.6% of Canadians expect minorities in the future, but 80.6% would prefer a majority. Oddly, only Green voters aren't in favour of a majority government. Why Bloc or NDP voters would like to see a majority government is beyond me. "I want to vote for a party that will be absolutely irrelevant for four years!" How does that make sense? The NDP and the Bloc have had real influence on how the government is run because they weren't in majority situations.

As to who can best manage a minority government, and Nanos begs the respondents to put aside their political views (they don't), Stephen Harper leads with 32.8%, followed by Michael Ignatieff at 23.0%, Jack Layton at 14.4%, and Gilles Duceppe at 5.9%.

The projection will be updated either tonight or tomorrow morning.
Posted by Éric at 9:47:00 AM