Two new polls for your consumption: EKOS and Angus-Reid.

Taken between October 21 and October 27 and involving 3,220 Canadians, here are the national results: 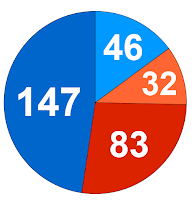 The poll would result in the following seat totals:

The poll also asked whether each party leader should remain as leader or be replaced. Stephen Harper got 45% support to stay, while 40% said he should be replaced. The split was 31% to 46% for Michael Ignatieff and 51% to 25% for Jack Layton. Obviously, Layton has the best number here, while Ignatieff's is troublesome.

Taken between October 23 and October 24 and involving 1,001 Canadians, this poll found the following national support:

Very similar to the EKOS findings. The regionals, however, are quite different.

In British Columbia, the Conservatives have a decent lead with 43% followed by the Liberals at 27% and the NDP at 25%. The Greens had only 2%.

In the Prairies, the Tories have an unbelievable 73%. The Liberals have 11% and the NDP has 9%.

The Bloc are doing well in Quebec in this poll, with 40%. The Conservatives are next with 21% and the Liberals are close behind with 20%. The NDP is at 15%.

In Atlantic Canada, the Conservatives lead with 35%, the Liberals are next with 32%, and the NDP is in third with 26%. 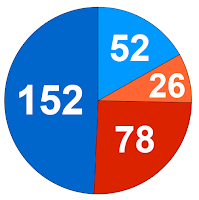 Phew! Now that this is all out of the way, I'll do a projection update tomorrow morning.
Posted by Éric at 11:14:00 PM