Details of the AR Poll

Sorry for the delay yesterday in writing more about the new Angus-Reid.

In British Columbia, the Conservatives lead with a very strong 47%, followed by the NDP at 22%, the Liberals at 21%, and the Greens at a disappointing 9%.

In Alberta, the Conservatives take a hit and stand at 52%, followed by the Liberals at 21%, the Greens at 12%, and the NDP at 11%. That is a big Liberal result, and as some have speculated, it might have something to do with the unpopularity of Alberta Premier Ed Stelmach.

The Conservatives are doing well in the Prairies, however, with 57%, as are the NDP with 23%. The Liberals are down to 17%.

In Ontario, the Conservatives have a huge 16-point lead over the Liberals, 45% to 29%. The NDP seems to have benefited as well, and are at a very strong 19%.

The Liberals still hold on to the lead in Atlantic Canada with 42%. The Conservatives are weak at 28% and the NDP is even weaker at 20%. 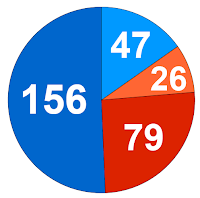 So the Tories get a slim majority. What hurt them was a weak performance in Atlantic Canada, coupled with a weak performance there by the NDP. In a way, this demonstrates the danger of "under-performing" in any one region of the country.

The poll also asked who would make the best Prime Minister. Stephen Harper was comfortably ahead with 29%, followed by Michael Ignatieff at a disastrous 12% and Jack Layton at 11%. The "none of them" option earned 24%. This has changed my "Best PM" track, with Harper losing three points and Ignatieff losing four.

People were also asked which leader would best handle different issues. But as I've said before, the meaning of this is useless since we do not know what is motivating these answers. A quick example is health care. If you want more public or more private, your answer as to who would best handle health care would be different.

Bad news all around for Ignatieff, while this is certainly good for Harper. This poll is also better for Layton than usual, but still means a drop of 10 seats.
Posted by Éric at 11:49:00 AM