Details of the IR Poll

The details of the Ipsos-Reid poll are now available. Here are the full national results:

A big gap, and a big Conservative number next to a small Liberal one. The NDP is also way down.

In British Columbia, the Conservatives are way ahead with 49% to the NDP's 23%. The Liberals are third with 18% and the Greens pull up the rear with only 9%.

In the Prairies, the Conservatives put up a 60% number, followed by the Liberals and Greens at 14% and the NDP at 13%.

In Ontario, the Conservatives have a good lead with 41%. The Liberals are at 32%, the Greens are at 14%, and the NDP is at 13%. It is a very dangerous thing for the Greens to be out-polling the NDP, which the party manages to do in three regions.

The Bloc Quebecois has a very comfortable lead in Quebec with 42%, followed by the Liberals at 22%, the Conservatives at 18%, the Greens at 11%, and the NDP at 7%. As I said yesterday, such a big gap between the Bloc and the federalist parties inflates the BQ's numbers.

The Atlantic Canada result is a little wonky, with the Conservatives at 46%, the Liberals at 30%, and the NDP at 19%. But what do you expect with only 57 respondents. 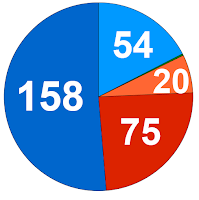 The poll would result in the following seat totals:

So another majority poll for the Tories. The Liberals actually lose a few seats, the NDP loses almost half of their MPs, and the Bloc gets back up to their historic-best of 54. The Greens actually squeak out a win as well - in Ontario. I have 14% as the bar needed for the Greens to take a seat in Ontario (probably Guelph).

Really, with the margin of error, there is nothing new in this poll. The Conservatives still have a big lead, the Liberals are still under 30%, the NDP is still under-performing, and the Bloc is still in a position to make modest gains.
Posted by Éric at 9:44:00 AM