The new EKOS poll this week (thanks to DL for the sneak-peek) shows the Conservative lead narrowing a little. But just a little.

Taken between October 14 and October 20, and involving 3,270 Canadians, these were the national results:

Certainly, still a good result for the Conservatives. But they want to be much closer to 40%, if not above it. This sort of result would give them more or less what they had in the 2008 election. The Liberal result is certainly bad, but it is better, which is a good sign for them. The NDP needs to be worried about their falling to the wayside.

In Alberta, the Conservatives are good at 59.5% and the Liberals are very competitive at 21.7%. The NDP is in trouble in Edmonton-Strathcona with 8.3%.

As has been the case for awhile now, the Conservatives lead in almost every demographic. Only the less-than-25-year-olds have withstood their charms. The Conservatives also lead in the major cities, including Toronto, while the Liberals have moved back into first, ahead of the Bloc, in Montreal. 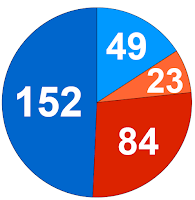 So the Conservatives are back into minority territory, but only just. No one else stands to improve much at all.

This also means that 39.4% chose a Conservative government of some kind while 34.8% chose a Liberal government. For the Tories, that is only 3% higher than their national support. For the Liberals, that is 28% higher.

As to how the supporters of the various parties answered, less than 10% of Conservatives and Liberals wanted their opponent in government. But for the three perennial opposition parties, a Liberal minority is the clear favourite. In fact, for all three parties, a minority of some kind is preferred to a majority. Which shows sense.

Almost half of NDP supporters (49.6%) believe that an NDP government is best. Those understanding that this would be impossible chose the Liberals (31.6%) over the Conservatives (18.5%) as the government.

Bloc supporters are slightly more sensible, with 46.7% saying "none of these". The Liberals were next with 30.3% and the Conservatives last with 22.9%.

As usual, this shows that the Liberals have more potential for growth by picking at the supporters of the smaller parties. How to do that is another matter entirely.
Posted by Éric at 8:38:00 AM