If Canada had a Two-Party System

Though other parties do try to run in American elections, only the Republicans and the Democrats are really in it. While officially it isn't a two-party system, in practice it most definitely is. What would happen if Canada had a two-party system of the Conservatives and the Liberals?

To determine what would happen in such a case, I've tapped an EKOS poll from July which listed people's "second choice". Using these numbers, I assigned votes given to the three smaller parties to the two major parties instead. For example, 43.2% of NDP voters listed the Liberals as their second choice while 14.1% listed the Conservatives. Assuming a similar breakdown if only those two parties were a voter's options, we get 24.6% voting Conservative and 75.4% voting Liberal. I also assigned votes to independents and the other parties 50/50.

I then used UBC's election forecaster to assign those votes uniformly to the 2008 electoral results. And this the result I got: 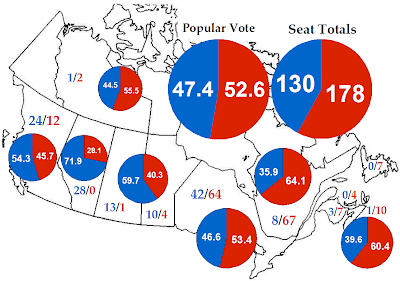 Now that is a divided country! It almost looks American.

Now, let's assume that the sovereignty movement is strong enough to make the Bloc Quebecois a viable party in Quebec. Assigning the votes to the three parties according to how the "second choice" broke down in the province as a whole, we would get the Bloc at 43.4%, the Liberals at 30.7%, and the Conservatives at 26.0%. The seat totals would be 49, 16, and 10, respectively.

Instead of a Liberal majority, this would result in the slimmest of Conservative minorities as they would have 132 seats to the Liberals' 127.

Anyway, this is an interesting look at how Canada divides between the right and the left, if those are the only choices. It's actually a lot closer than I would have thought.
Posted by Éric at 10:31:00 AM