EKOS has released a new poll today, taken between September 30 and October 6, and involving 3,333 Canadians. And boy, is it a rough one.

EKOS is a consistent, quality pollster. And for them to give the Conservatives a 14-point lead is incredible. The Liberals are actually doing worse than their disastrous 2008 election result. The Tories have one of their best results, and undoubtedly their best result from a completely reliable pollster.

It doesn't get any better for the Liberals at the regional level.

Not even Atlantic Canada can give the Liberals some good news. The Conservatives lead with 34.8%, the Liberals follow with 32.4%, and the NDP is in third with 26.2%.

There is no silver lining in this poll for the Liberals. The Conservatives lead in every demographic except those under the age of 25, and they lead in every major city except in Montreal, where the Bloc has opened up a double-digit lead over the Liberals. 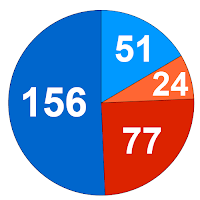 So the Conservatives have finally gotten themselves into a majority. But it's a slim one.

Why is it slim? They're still doing worse in BC than they did last year, and their Quebec and Atlantic Canada results are still below their 2006 result.

The Liberals manage to maintain their current caucus size, mostly because this poll was no good for the NDP either.

The NDP did the Liberals, and themselves, a favour when they supported the government.

The projection will be updated some time today.
Posted by Éric at 8:21:00 AM