Angus-Reid has released a potential game-changer of a poll, taken on September 29 and September 30 and involving 1,000 Canadians. This is the first poll taken entirely in the new political environment, where the government was guaranteed to stay alive thanks to the NDP, and the Coderre affair was in the news. The result:

The Conservatives are steady, unchanged from the last Angus-Reid poll. But the Liberals have dropped two points and both the NDP and the Bloc are up. This is almost a repeat of 2008's election.

Compared to the consistent regional results we've been seeing over the last week or so, this poll has some significant differences.

In British Columbia, the Conservatives are doing well with 42% while the Liberals have dropped to 23%. The NDP stands at 28% and the Greens at 7%.

Nothing special in Alberta, but the Liberal vote has tanked in the Prairies. The Conservatives lead with 50%, followed by the NDP at 29% and the Liberals at 13%.

Ontario looks better and better for the Tories, and they've polled 44% there. The Liberals are at a dismal 30%, while the NDP is doing somewhat better than usual at 16%.

In Quebec, the Bloc is doing very well at 41%, followed by the Liberals at 27% (no real change). The Conservatives, surprisingly, have dropped to 14%, slightly better than the NDP at 13%.

In Atlantic Canada, a big change. The Liberals are at 34%, the Tories at 32%, and the NDP at 28%. A three-way race, not the Liberal super-lead we've seen over the last week.

Are some of these results more of an outlier, or will we see other polling firms show similar results over the next week or two? We'll have to wait and see. 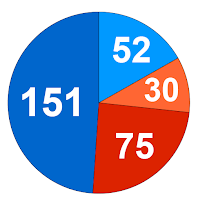 Still no majority. And why? Quebec! As I've said over and over again, the Tories can't win a majority without Quebec. They've polled well in BC and Atlantic Canada, two regions they've been struggling in, and excellently in Ontario. But 14% isn't enough in Quebec, and the difference between the 2008 election and this poll is a majority, since with a 10-seat win in the province in this projection the Tories would have a majority.