EKOS has its new poll this morning, taken between October 7 and October 13 (but not during the Thanksgiving weekend) and involving 2,729 Canadians. The national result:

These numbers are almost unbelievable to me, but not because I doubt the pollster's results. I don't. I just don't understand! There's nothing really going on right now. There's no Liberal scandal, there's been no Conservative governing coup. But the Liberals are more unpopular now than during the sponsorship scandal! And while Michael Ignatieff can certainly be seen to be unlikeable, he really hasn't done much to make people dislike him. It is difficult to hate someone who hasn't really done or said all that much. It really is puzzling - the Conservatives have more support than the Liberals and NDP, combined.

The regional results are excellent for Stephen Harper. In British Columbia, he has 39.1% support, followed by the Liberals at 23.2% (still relatively okay) and the NDP at 20.3%. The Greens have gained some ground and stand at 17.4%. With the Tories up and the NDP down, Dawn Black's vacated NDP seat could fall into Conservative hands.

These results really can't be reconciled with the recent Ipsos-Reid poll. One of them is wrong, or the reality is somewhere in between.

The Conservatives lead in every demographic, as well as in Vancouver, Calgary, and Ottawa. The Liberals do still lead in Toronto, with 40.8% to the Conservative 38.9%. The Bloc has a big lead in Montreal, with 37.9% to the Liberal 26.0%. With these sorts of numbers, the Bloc could actually make gains on the island. 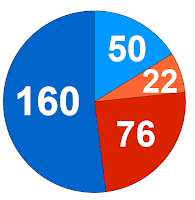 So this is the first poll we've seen that gives the Tories a comfortable majority. The Liberals actually win one seat fewer than they did in 2008, while the NDP drops 15 from the election. The Bloc gains one seat, but with the Conservatives in a majority the Bloc actually loses a lot of influence. At this point, the only way we'll see an election is if the Prime Minister decides to have one. The opposition is going to have to start playing nice, simply to remove any pretext for the calling of an election.

The projection will be updated either today or tomorrow.
Posted by Éric at 9:00:00 AM