A new Angus-Reid poll gives each of the parties the exact same level of national support that they had at the end of the 2008 federal election. But a few regional differences would result in a marginally different House of Commons. 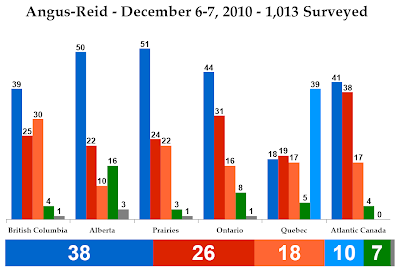 Compared to Angus-Reid's last poll conducted at the end of October, the Conservatives have gained only one point, and now lead with 38%. The Liberals are unchanged at 26%, while the New Democrats are down one to 18%.

The Bloc Québécois is steady at 10%, while the Greens are up one to 7%.

UPDATE: Note, Angus-Reid reports a margin of error of 3.1. As they use an online panel, it is, according to organizations like the AAPOR, inappropriate to report a margin of error. I'll quote the American Association of Public Opinion Research on this:

AAPOR considers it harmful to include statements about the theoretical calculation of sampling error in descriptions of such studies, especially when those statements mislead the reader into thinking that the survey is based on a probability sample of the full target population. The harm comes from the inferences that the margin of sampling error estimates can be interpreted like those of probability sample surveys.

While it is the same situation in the top line numbers as in 2008, the regional breakdowns do show some shifts. Oddly enough, it seems to be a shift of Conservative support from West to East.

In Ontario, the Tories are up three points and lead with 44%. The Liberals are down one to 31%, while the NDP is down three to 16%. The Greens are up one to 8%. These results do echo some of the recent polls we've seen.

The Conservatives lead in British Columbia with 39%, up seven points from the last poll. The NDP is down seven to 30%, the Liberals are down three to 25%, and the Greens are down four points to 4%.

In Atlantic Canada, the Conservatives have jumped 12 points and lead with 41%. While normally this would be the result of a mere statistical anomaly, this isn't the first time that we've seen the Tories in front in Atlantic Canada. The Liberals are down five points here, and trail with 38%. The NDP is down four to 17%.

The Conservatives are down 12 points in Alberta, but still lead with 50%. The Liberals are riding very high at 22%, up six. 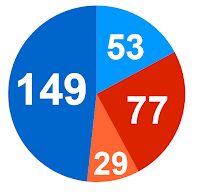 With this poll, the Conservatives would win 18 seats in British Columbia, 26 in Alberta, 22 in the Prairies, 64 in Ontario, seven in Quebec, and 11 in Atlantic Canada for a total of 149, up 13 from Angus-Reid's last poll. Short of a majority. I've said it once and I'll say it again: no majority without Quebec.

The Liberals would win seven seats in British Columbia, two in Alberta, four in the Prairies, 30 in Ontario, 13 in Quebec, and 19 in Atlantic Canada for a total of 77, down three.

The Bloc would win 53 seats in Quebec, unchanged from Angus-Reid's last poll.

The New Democrats would win 11 seats in British Columbia, none in Alberta, two in the Prairies, 12 in Ontario, two in Quebec, and two in Atlantic Canada for a total of 29, down 10 seats.

Clearly, the Conservative gain has come at the expense of the New Democrats. Being only six seats short of a majority would not be a bad position for Stephen Harper, and certainly one that would not mean the end of his leadership.

Speaking of which, Angus-Reid asked respondents whether the leaders of the various parties should be changed. Of his own supporters, Stephen Harper received the green light from 79% of Conservatives, compared to 14% who would like to see him go.

Jack Layton had a similar result, with 80% saying he should stay and only 9% of New Democrats saying it was time for a change.

Elizabeth May received the support of 64% of her voters, while Gilles Duceppe did the best of all with 86% saying he should stay as leader of the Bloc Québécois.

The worst performer was Michael Ignatieff. Only 38% of Liberal voters said he should remain leader of the party, compared to 46% who said it was time for him to go.

The bad news doesn't end there for Ignatieff. Only 14% of Canadians approve of his performance, compared to 47% who disapprove. That is a widening of the gap by six points compared to Angus-Reid's last poll. For Harper the numbers were 26% approval and 47% disapproval, not good either and an increase in the gap of three points. Jack Layton had the best result, with 25% approving and only 34% disapproving, though that did widen the gap by five points.

Angus-Reid also asked people to attach character traits to the four leaders in the House of Commons. Leaving aside those traits that have seen only a minor variation since the end of October (<5 points), we see a very bleak picture for the Liberal leader. The traits that grew by a significant amount for Stephen Harper were "efficient" and "strong", and for Jack Layton they were "compassionate", "strong", and "intelligent". The one trait to increase for Gilles Duceppe was "intelligent".

But for Ignatieff those that saw a big increase were "arrogant", "inefficient", "weak", "boring", and "out of touch". The one trait that had a large decrease was "intelligent".

While it is just a poll, the combination of factors makes this one of the worst ones I've seen for the Liberals recently. It argues that Michael Ignatieff has taken the party no further than Stéphane Dion did in 2008, and his leadership numbers are heading in the wrong direction. Poll-wise, it has been a very bad week for the Liberal leader.
Posted by Éric at 1:40:00 PM